Talking with The Bridge to Caracas author Stephen Douglass 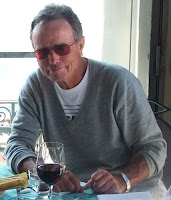 In your synopsis for your debut novel The Bridge to Caracas, the main character Jim Servito is described as “brilliant, cynical, ruthless and contemptuous of the law.”  Now, writing a character as badass as that would either be a lot of fun, or rather daunting.  What was it like for you?

Developing Jim Servito’s character was a lot of fun for me. While I portrayed him as a fictional character, he, and what he did, are the reasons I wrote the Bridge to Caracas. In real life, he managed to steal $325,000,000 from the Canadian and U.S. Feds, via the mechanism of gasoline tax evasion.

In what ways do you think readers empathize with Karen Taylor?

Just as I did with Jim Servito, I portrayed Karen Taylor as a fictional character. In real life, she is now my wife. I have a passionate belief that readers would empathize with Karen because, like her, at one time or another in their lives, they found themselves married to the wrong person, while simultaneously being in love with someone else.

Did you know from the outset that The Bridge to Caracas would be the first book of a trilogy?

I didn’t know The Bridge to Caracas would be a trilogy until so many of my friends in Canada and the U.S. asked me if I was a one-trick pony. Their appreciation of the story and encouragement convinced me to continue into the abyss of uncertainty. Now I would have to write about something I hadn’t lived. I plodded on, however, and I’m glad I did. I’m having more fun than I ever imagined.

Tell me about your upcoming book The Tainted Trust.

There was $325,000,000 in an anstalt in Leichtenstein at the end of The Bridge to Caracas. Only four people knew about it: Mike King, Karen Taylor, Phillip Servito, Karen’s son, and Alfred Schnieder, the Caracas banker. The Tainted Trust is the incredible story of what happened to that money. Phillip, like his father, is very greedy.

Do you plan to write anything outside The King Trilogy?  Stand-alone thrillers?  Nonfiction?  Naughty limericks?

Yes. I thoroughly enjoy writing. I plan to do it until the day I die. Perhaps longer.

What’s more fun to write: dialogue or description?  Why?

Turn the calendar back about a hundred years: no computers, no internet, no social media... do you think you still would have written and published a book?  Why or why not?

I would definitely have written a book under those circumstances. I came very close to simulating those conditions when I wrote The Bridge to Caracas. The entire manuscript was completed in pen and ink, beside a fireplace. In the absence of a computer and internet, I would have taken the manuscript, jumped on my horse, and raced to a publisher. Then I would have crossed my fingers and hoped that he, or she could read my writing.

Peter De Vries once said: “I write when I’m inspired, and I see to it that I’m inspired at nine o’clock every morning.”  What about you – do you have a writing routine?

I have no routine. I spent my entire business career seeing to it that I’m inspired every morning. I don’t want to do that any more. In my mind, however, I’m always thinking about what to write next. Frequently I wake up in the middle of the night with an inspiration. Sometimes all that comes out is pee.

Name two authors who influenced you or whom you try to emulate.

John Grisham is my number one influence. The story of how he succeeded with his first two books: A Time To Kill and The Firm, is a legend in my mind. As to style, quality of writing, and research, Ken Follet is the king of fiction.

Imagine a hotshot Hollywood movie producer showed up at your door and handed you a contract to make a Big Budget Movie of The Bridge to Caracas.  Who would you cast as Jim Servito, Karen Taylor and Mike King?

Fame and fortune was not my motivation for writing The Bridge to Caracas. Instead, my fondest dream was to hang out at The Hotel California and interview starlets for the role of Karen, one by one.

These actors, in the prime of their careers, would have been perfect for the time frame of The Bridge to Caracas:

Al Pacino to be Jim Servito,


Brad Pitt to be Mike King,
Demi Moore to be Karen King. 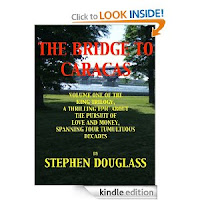