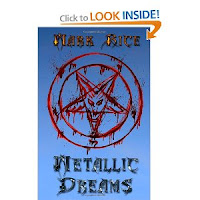 If  my character Sasha Jackson were real, and if Mark's character Spark MacDubh were real, I'm quite certain Sasha and Spark would me deep in the throes of a hot n' heavy romance!
Here's a bit more about Mark and Spark... 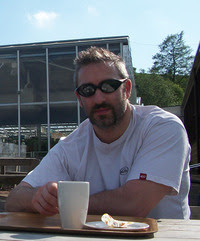 Born in Glasgow, Scotland. Grew up in the new town of East Kilbride. Began scribbling stories at the age of five. At ten, discovered heavy metal and Douglas Adams. Never looked back. Rumours that he sold his soul to the Devil at a Scottish crossroads in exchange for literary flair may have been exaggerated. Then again, Robert Burns saw Satan in Scotland's Old Alloway Kirk...
Long-haired Scottish rock singer Spark MacDubh drops dead on a snow-covered street of his native Bronzehall, only to be jolted back to life by what he calls lightning from Heaven. Following Spark's resurrection, his sanity is stretched thin: during waking hours, he receives instructions from deities known as the Metal Gods; at night he is haunted by visions of a Devil who wields ultimate power over the music industry. Employing behaviour that swings between messianic and infernal, Spark gets his old band back together with a view to steering them towards greatness. The Devil, however, only grants success in exchange for souls. Unwilling to use his band's eternal souls as bargaining tools, MacDubh comes up with a preferable route to stardom: put the Devil out of commission for good. A simple idea but questionable in terms of practicality. For starters, it requires a trip to Hell, and only the right music can open the gateway to that dimension. Catch-22? More like Catch-666.
Posted by Jill at 7:51 AM