Today I get the chance to introduce readers to a new author and to a new writing style.  I "met" Randy via Twitter and I look forward to joining him for a pint someday (he says he's buying!). 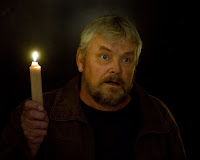