Audio-Visual clips from the launch party

Here is a link to my reading from "The Lies Have It" In addition to the reading, I also briefly chat about how I wrote the book... It took SIX years!  Click here.

I had a very hard time choosing the title for the third Sasha Jackson Mystery.  I encouraged input from other people (via Facebook, this blog, Twitter, etc.)

I was fond of "X Marks the Plot".  Others liked "Crash and Burn" or "Cuff Me Tender."  I wanted something that had a bit of a pun or a twist on words to it (as the two previous books had).  And, I wanted to reflect something of the plot in the title.  Eventually, I settled on "The Lies Have It".

As with the other books, I Googled the title to see what was already out there that was the same or similar to it.  Nothing came up (or at least nothing significant).

Naturally, I have set up "Google Alerts" for all of my book titles (sometimes this is the only way I learn of reviews!)  I set up the Google Alert for "The Lies Have It" a few months before the release since I began online promotion for it a while ago.

Well, the alert sends me pretty much everything with whatever key terms I flag.  Lo and behold, about two weeks ago, I got an alert (and another one this week) for "The Lies Have It".

I wonder how many people have gone to that blog thinking that it had some association with me????

"The Lies Have It" Launch Party Pics & More!

The launch party for The Lies Have It was earlier this month and it was a blast!

Paul Alves from Paul The Book Guy was there and got some great audio clips from fans of Sasha Jackson.  Listen here.  (The first 5 minutes are about the launch party, but the rest of the episode is well worth a listen too!)


And of course, we took lots of photos.  Have a look! 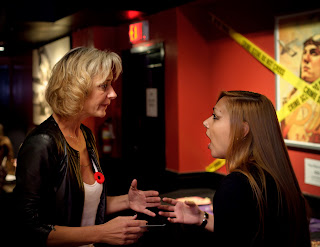 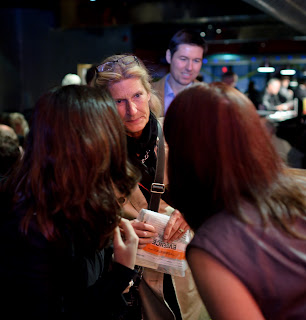 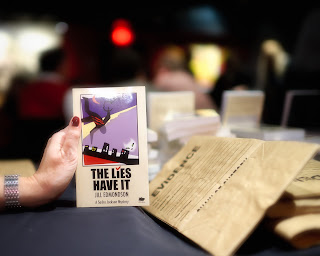 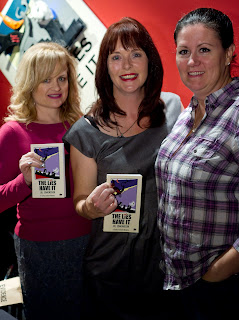 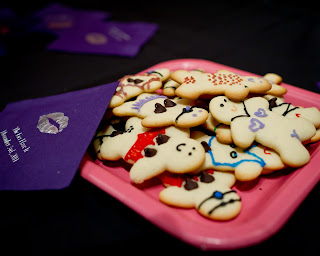 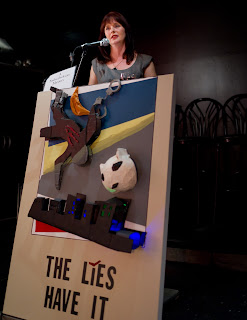 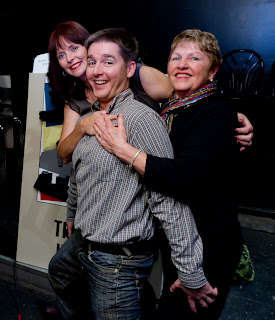 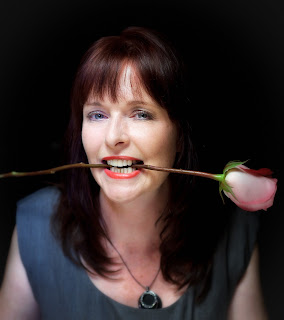 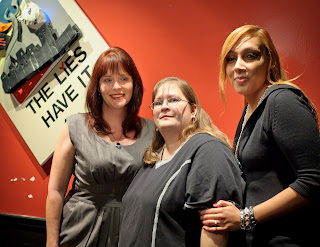 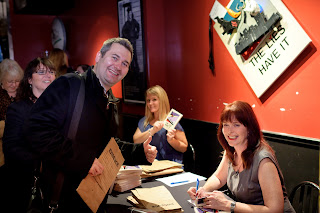 It's always nice to see justice prevail, but in the following cases it happens in an unusual way.  A few judges have given sentences that offer a twist on "making the punishment fit the crime."

1.  Judge Sacco of Colorado has a unique way of sentencing people who break noise by-laws.  He makes them listen to blaring music for a given length of time.  The twist is that the song selection is something from Barry Manilow, Dolly Parton, or perhaps a nursery rhyme. 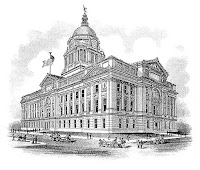 2.  Judge Hostetler of Ohio wanted to teach a couple guys to respect women.  The guys had thrown beer bottles at a woman, 60.  The guys had a choice of jail time or spending an hour walking around downtown dressed as a woman.

3.  Also from Ohio: A slumlord in Cleveland was sentenced to six months house arrest in one of his own run-down buildings.  Plus he was fined $100,000.

4.  Melissa Dawn Sweeney of Texas was found guilty of animal neglect (which ultimately led to the death of a horse).  She had to do 30 days in jail, the first three of which she was to be fed nothing more than bread and water, which was apparently "more than her horses got".

5.  Jennifer Langston of Pennsylvania was convicted of drunk driving causing death.  Her sentence was only 30 days in jail, but she was also sentenced to carry a photo of the man she killed.  The photo - provided by the victim's mother - was a picture of the victim in his coffin.  She has to carry the photo for 5 years.


6.  Judge Mike Cicconetti had an unusual sentence for a teenager who was caught stealing "adult movies" from a video store.The teen had to stand outside the video store, wearing a blindfold and a sign that said "See No Evil".

I'm writing a piece on funerals (don't ask why...) and while writing, I wanted to use the words "death," "dying," and "dead" as little as possible.  I could easily think of several euphemisms and idioms for the aforementioned but wanted to find a few other terms and phrases.  So, of course, I Googled it and came up with several interesting options.  It seems to me that mystery writers might find this useful, even though this list is far from complete..

CRASS TERMS:
Dirt Nap,  Worm Food,  Go Into The Fertilizer Business,  Sleeping With Fishes,  Six Feet Under,  Kicked The Bucket,  Pushing Up Daisies,  At Room Temperature,  Bought The Farm,  Rubbed Out,  Snuffed Out,  Checked Out,  Tits Up,  Buying a pine condo.

PHRASES:
Danced the last dance,  Gone into the West,  Bought a one-way ticket,  Gave up the ghost,  Joined the invisible choir,  Shuffled off the mortal coil, With his ancesters.

GENTLE TERMS:Resting in peace, Asleep, Gone to meet their maker, That goodnight, In a better place,  Going to the eternal reward,  Breathed his last.
Posted by Jill at 11:19 PM 5 comments:

Part 3 of the motley crew in "The Lies Have It"

Here's a quick intro to a few more of the nutjobs in "The Lies Have It" - Private Investigator Sasha Jackson's latest case.

Hugh Vanderhoof is the owner of the bar that people associate with the murder of Ian Dooley, the fetish dude.  Hugh's interest in anatomy is limited to his first year of medical school.

Dawn Valentini is a chain smoking militant lesbian newspaper reporter with a flair for Irish step-dancing and a fondness for the Civil War.

Moose the Florist is a Latino behemoth with a heart of gold.  He's also a part-time bouncer and it's hard to be intimidating when you smell like roses.

Here's a quick look at a few of the books I've read recently:


Thomas Frank: The Wrecking Crew
I loved this!  Read it and learn.  (It is a bit of a screed, but it's edifying nonetheless). 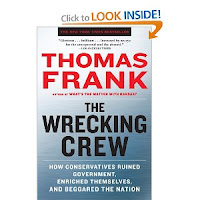 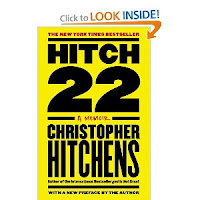 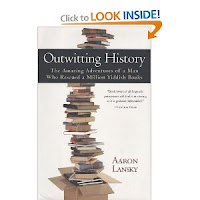 Steven Tyler: Does the Noise in My Head Bother You?
I love Aerosmith, but this book turned me off of Steven Tyler.  Skip this one, and read "Life" by Keith Richards instead. 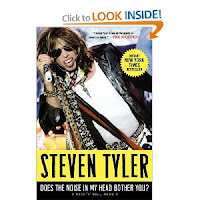 Erik Larsen:  In the Garden of Beasts
Not bad, but not great and nowhere nearly as interesting as his previous book "The Devil in the White City".  Run right out and buy a copy of "Devil" and devour it immediately, but give "Garden" a pass. 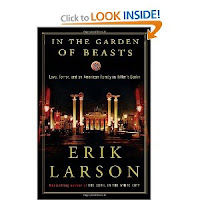 1.  Todd Remis of New York sued the wedding photographer because the shutterbug left the reception before the final dance and bouquet toss.  I guess those are special moments that oughtta be captured on film, but... Remis and his wife have now divorced, and the lawsuit was launched after the marriage ended.

2.  Police Officer Jeremy Merck was a customer at Good Foods to Go deli in New Jersey where Ryan Burke happens to work.  Ryan Burke also happened to have been arrested once upon a time by Officer Merck.  For revenge, Burke added some chest and pubic hairs to a bagel ordered by Officer Merck.  Of course, Merck has launched a lawsuit (case is still pending).

3.  An unnamed woman from Wisconsin is suing a man with whom she had a one night stand.  This classy event took place in the man's pick-up truck.  He failed to disclose to her that he has herpes.  She is now suing for $350,000.  By the way: she is married, and so is the guy (but not to each other).

4.  Heavy-set Martin Kessman of New York is suing the White Castle hamburger chain because their seats (stationary booths) are too small, and this violates his civil rights.

I am very pleased (and very flattered!) to be the topic of the latest blogpost by author Rosemary McCracken.  Have a look here at Rosemary's blog.
Posted by Jill at 7:49 AM No comments:

People do really odd things when they feel that thay have been wronged.  Some of them take it to extremes... and sometimes they win!