No One Ever Asks Me If I Play The Drums...

Readers and writers are familiar with the phrase "write what you know".  It's good advice as it is certainly much easier to portray a setting or to describe a topic with which you are familiar. 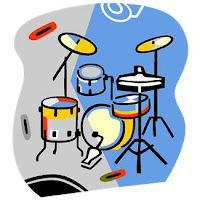 But let's not forget:  Fiction is FICTION!!!

This Spring has been a busy time for me.  I've done a number of interviews, several book signings and then of course I was at the Bloody Words Mystery Convention this weekend (more on BW in another post).

Several times  - and I mean SEVERAL - times in the last while, people have either obliquely or directly asked me about myself and the sex stuff/fetish stuff in the Sasha books.  At times, the question is subtle ("How did you do the research for..." or "How do you know so much about...?") but I have frequently been asked point blank: "Are you into [whatever] or are you Vanilla?"

I could never see myself asking anyone, whether a close friend or a casual work acquaintance, about their sex life.  That's just not cool.  It's actually really kind of creepy to think that people might be picturing MOI with whatever or doing whatever.  Ick. Please imagine something/someone else.

I do like talking about the books and I love Sasha, and yes, I am a lot like her.  And I think Sasha's pretty fleshed out: We know her background, her attitudes, her hobbies, her sense of humour and her (dubious) talents.  Yet no one has ever asked me if I do in fact:

-play the drums
-sing
-have a talent for burglary
-know how to drive (actually, Bill Selnes at Mysteries and More blog did ask me that, but he is the only one...)

There are so many places and things mentioned that people don't ask about that I DO know first hand but many folks don't realize this:

- all the Mexico stuff in Dead Light District is true - I used to live there
- all the gambling references are true and accurate: my real Dad (and Sasha's Dad) is a professional gambler (and Dad is mentioned in the Blackjack Encyclopedia for one of his card counting theories)
- Dooley's house in High Park and Jessica's apartment downtown are both places where I once lived
- Sasha's old office on Yonge Street is where I once rented space
- her tastes in music, food and drink are all the same as mine

But no.  No one ever asks about this stuff.  Everyone wants to know instead about phone sex, or hookers or leather or or or...   It's really annoying.  I doubt anyone ever asked Parker if he's actually killed anyone, or Block if he's really in love with a former prostitute, or Larson if he really slept around that much.
Posted by Jill at 11:01 PM 5 comments: