A couple weekends ago, I did another workshop at Nanopod Studios. This was a glass fusing workshop, which I have done before (and love doing!!!) but Tosca Teran (the owner creative wizard of Nanopod)  did things differently than what I have tried elsewhere.  (You may recall that I did a post a few months ago on Pate de Verre which was also at Tosca's studio).

At this workshop, there were tons of materials to work with, in addition to sheets of glass.  There were colourful glass rods (about the length and diameter of a pencil), stingers (very thin glass rods - skinnier than a spaghetti noodle), and lots of Frit (basically glass sprinkles), plus paint.

Another Budding Artiste named Lori did the workshop with me.  She too has blogged about the experience, and I have to admit her photos are much better than mine, so I shamelessly stole a few of them! 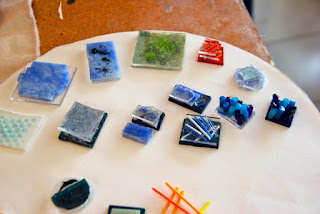 These are the pendants before being kilned.  Mine are mostly the blue ones in the middle (but not the larger ones along the upper and left edge of the frame). I also did the red one near the top.  You can see the use of the stringers on the blue square with white "stripes".  Stringer were cool to work with, they snap so easily.  The two dark blue and turquoise ones to the right - that sort of look like weird blue Lego pieces are the ones I did with glass rods.  The rods cuts fairly easily with a tool that looks like it belongs to an evil 18th Century dentist.  The whitish one at "one o'clock" is layers of clear and light blue glass with lots of Frit between the layers.  And finally, towards the left, the dark blue square with a whitish/clear piece on top is another example of Frit (plus some paint).  And at the bottom left, is a cool piece made by my classmate Lori.  Zoom in a bit and you can see that it's a dolphin jumping out of the water.

Another pre-kiln picture; that's Lori in the background.  My shirt and Lori's pants are a perfect colour match! 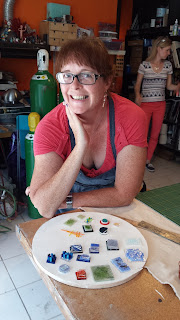 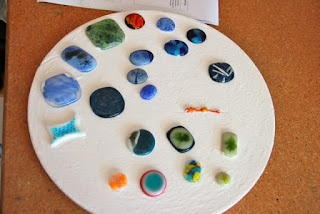 Here's what all of our pendants look like after spending a few hours at extremely high temperatures - like hotter than a Manhattan sidewalk in July. 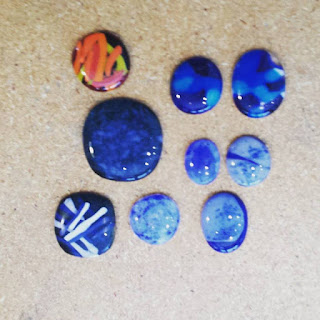 A close-up of the pendants I made. Too bad the photo above has such glare. But you can see how the ones with stringers turned out - pretty cool, eh? The two mottled dark blue ones in the center/upper right (above) are the "Lego" ones after being baked.  And in the pic below, you can see how nicely the Frit melted. 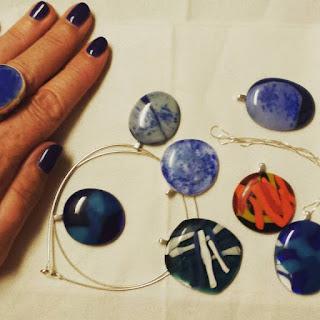 What made this workshop different than other is that we got to choose one pendant to make into a ring (sterling silver band).  I confess that I suck at metal work (see previous post on Sawpiercing).  So, Tosca did 99% of the work, but I did file the metal a wee bit. 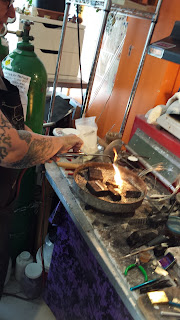 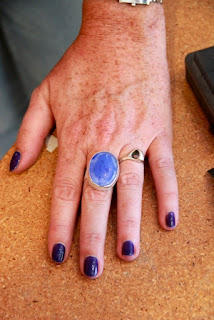 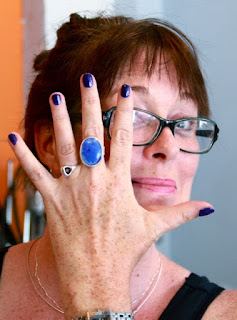 At any rate, I really like the way my ring turned out!  And I am very, very impressed with Lori's ring.  I think it's stunning!  I love the colours, I love the size and shape, and I hope she wears it often.  It's just gorgeous!
Lori has more pics on her blog called Frivolous At Last.  You can check them out here. 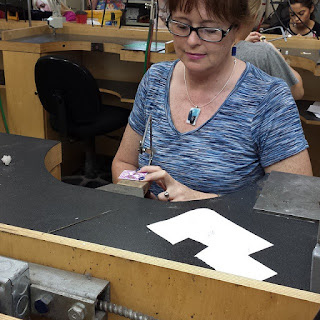 Earlier this summer I did a jewellery workshop.  This was my first time working with metals, and it was much easier than I would have guessed.  I've done a number of artsy-fartsy workshops in the past, and I really get a kick out of making jewellery. And, I enjoy trying my hand at various types of creative activities.  Writing is fun, but making something tangible offers a different kind of outlet and a different feeling of satisfaction.  And it's quicker! 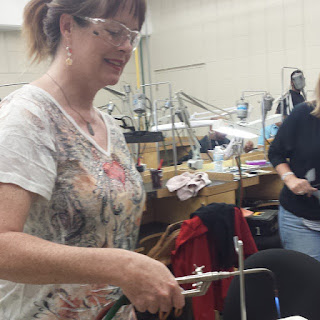 In the pic above, I am sawing a little square of brass.  It's fairly easy to saw through... if you have good technique.   What I mean by this is that it does not require a huge amount of strength, but the saw blades are very fussy and if you go too fast or at the wrong angle, they snap.  I broke 15 blades in four hours!

Yikes!  The photo above is my first time soldering.  I'm terrified of fire and explosive gas canisters.  The bits of solder themselves are finicky.  The metal balls up when it melts, and you have to act quickly to spread it into place. 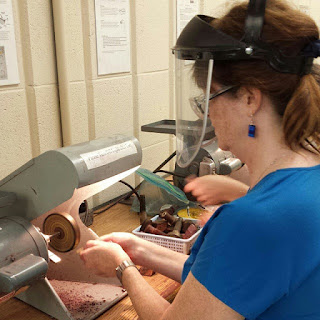 The final stage was buffing and polishing the piece.  This was easy, as the machine does all of the work.  But you need to take your time with it - the metal gets hot from the friction. 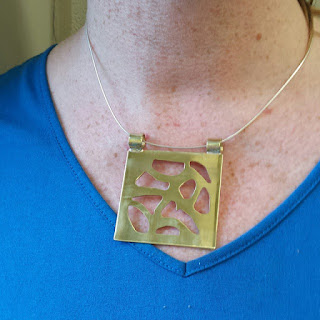 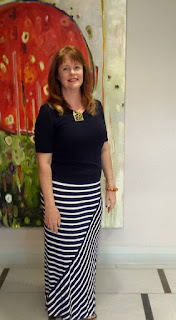 Ta-dah!  I don't really love the design (but don't hate it either).  I simply cut random shapes into the metal without any specific plan, and this is what I ended up with.  I guess it's kind of cool - certainly one of a kind!

I have to admit, even though I learned a lot and enjoyed trying something new, I do not LOVE working with metal.  It's a very precise skill; you have to be very exact and really pay attention to the details.  That doesn't jibe well with my usual bull in a china shop approach to so many things.

People often ask me about inspirations for my characters. Ha!  The answer is Real Life!  I swear to gawd, I have a magnet in the middle of my forehead that draws freaks and weirdos to me.  I seem to meet a great number of them via the dating world. So, I'll be doing a few posts in the coming weeks about dating in general, but for now, let me begin with El Jerko Supremo.

I had one date with Super-Doofus, and it was so bad it almost made me want to give up on dating all together.

Dickhead and I arranged to meet at a restaurant.  He had arrived a little early and was already seated at a table when I got there (that detail will be important a little while from now...)

Dude is middle aged.  He told me that for his "midlife crisis" he decided to get some tattoos.  He got his first tattoo a few months ago.  Now, I am not against tattoos, and any adult who wants one, should go ahead and get one.  But...

On Mr. Moron's forearm was a tattoo, a German quotation, comprising a few lines of text.  Did I mention it was in German? Yes, German.  Dingbat does not speak German.  But he still got a tattoo in German.

Loosely translated, the tattoo said: "I have no God, I have no master. I am my own master, I am my own destiny."  Something like that.  But in German.  I have no comment on the content of the tattoo, or the "philosophy" of it.  (Nietzsche anyone???) 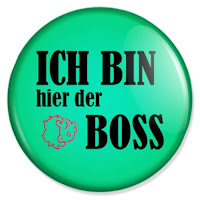 Well, Mr. Dumb Dumb - who apparently has never heard of  a German-English dictionary - had it spelled  "ick" in three of the four instances.  The fourth time, it was spelled correctly (Ich).  It's 2015 for gawd's sake... Look it up online before getting PERMANENT ink on your 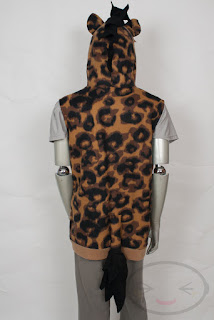 I commented on the three misspellings and he replied: "Yeah, it's got a few typos."  Typos?  Are you kidding me?  I really wanted to stick a fork in my eye at that point.  But I politely sat through the WORST DATE EVER IN THE ENTIRE HISTORY OF DATING.

When it was time to leave, Dorkface stood up and put on his... hoodie.  Captain Idiot told me  where he got the hoodie (in case I want to get one for myself?)  Here's the link to the site from whence he ordered a Hyena Hoodie - complete with a tail.  YES... MY DATE HAD A TAIL!
And, yeah, Sir Loser Lose-A-Lot is about 50, and he's still single.  I wonder why? 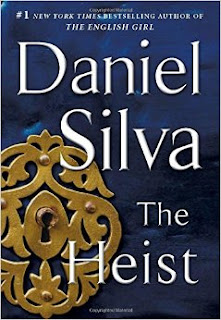 This was off to a rip-roaring start.  I loved the first half of the book!  But then... meh...  The second half felt unrelated to the first half, and I found it rather predictable at times, and a little bit forced (plot-wise) at other times.  I generally enjoy Da Silva's books, so my lukewarm feeling about this one won't deter me from reading more by him. 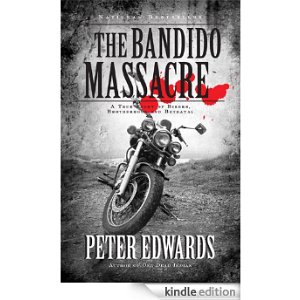 WOW!!!  This was terrific!  A weirdly, wildly wonderful tale of some of the most inept would-be tough guys ever!  Edwards has a terrific voice, and he gives enough detail to make you see and feel the places and people, but not so much that it feels bogged down.  A thoroughly enjoyable book - highly recommended!! 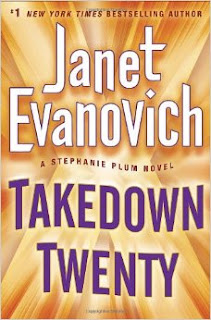 Totally MEH.  I was a die-hard fan of Evanovich/Plum from day one, but now... The books just feel forced and silly now.  Once upon a time, Stephanie's shenanigans were a delightful romp, but the magic is gone.  I'll probably read the next installment - because, hey, there's still Morelli and Ranger - and I hope the next one harkens back to earlier books.