Hmmm... Now that the 3rd Sasha Jackson Mystery is out, I'm starting to get some interesting feedback & fan responses about Sasha's love life.  Some readers (and reviewers) like Sasha more as a single chick, and some like the fact that she has a budding romance with the lawyer Derek Armstrong.

In Blood and Groom Sasha was single and dateless.  Her ex-boyfriend (and former band-mate) Mick was sort of in the picture.  The two of them have (had) MAJOR chemistry, but just can't get along for long, outside of the bedroom (or offstage... and the  stage stuff has zilch to do with the bedroom stuff... in case you were wondering!!!)

Halfway through the 2nd book, Dead Light District, Sasha has a very passionate encounter with Derek, a lawyer she first met via her detective life, and with whom there has been much flirtation.  They finally get together... but...

In book 3, The Lies Have It, Sasha and Derek are involved, but he's away on a business trip for most of the book.

So... what should I do with her love life in the 4th book, Frisky Business?  I could keep their relationship going, dial it up or down a bit, or I could make her single again.

Hmmmm, so does *FREE* work?

I did a promotion for three days this week for Blood and Groom.  The ebook version of Blood and Groom was free on Kindle from March 20th to 22nd.  (It's now only $2.99.)
I've never done anything like this before, so I have nothing to compare the results to, but...
Some people may question the idea of giving it away for free when I could be selling it and making some $ on it.  I guess, at first blush, it seems like cutting in on your own sales.  However, Blood and Groom was first released in November 2009, so it has really run its course.  I still do sell  paperback copies of it when I do store events and such, but  the bulk of the sales came (of course) during the first 6 or 8 months of its life.  So, NO, I don't really think I'm cutting into my own sales.  I see it more as revitalizing them.
Would I try another freebie event? Yes, definitely!I'd like to do something similar - perhaps with Dead Light District or The Lies Have It, or maybe with a different platform.  I don't know yet, but I am definitely looking into it!
Posted by Jill at 10:09 AM 1 comment:

A number of retail websites that list Dead Light District say that it is unavailable, out of stock, cancelled and such.  These websites are mistaken about the book's availability.  You can get it from several sources, in either paperback or as an ebook.

The sites listing Dead Light District as unavailable, etc. also have other errors.  First of all, it is not a Dundurn book (a number of sites still wrongly list Dundurn as the publisher - Dundurn never published this book).  Furthermore, on many of these same sites, the cover of the book is shown as a black and white photo of a woman, from the waist down.  She's wearing a very short skirt and has fishnet stockings on, and she is holding a gun. This cover was never used; no book by me was ever published with this cover.  (For the record, I absolutely HATE that cover - it looks like soft-core porn or erotica.)  Finally, the release date is also wrong (it shows as Dec. 2010).

The correct info is this:  Dead Light District was published as a paperback and as an ebook by Iguana Books in March 2011.

Dead Light District is on KOBO and NOOK and AMAZON and can be ordered directly from ME or from the publisher IGUANA. 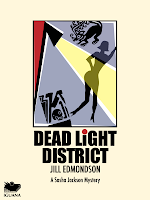