In this guest blog post (thank you, Jill!) I will set out my personal views on what I believe is the most crucial component of any worthwhile work of fiction: character development. Definitions are important here; a quick search on the web has revealed at least three quite different interpretations of the phrase. For the purposes of this post, I will define character development as the part of the writer's creative process in which the characters of a work of fiction are evolved. 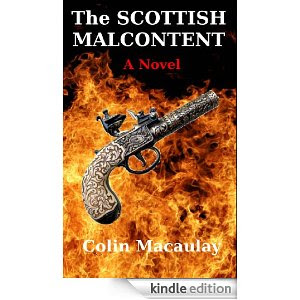 It seems to me that many writers today spend more time and effort on plot development than on characterisation. In our genre-driven age, it is plot that is seen to sell books. It is true that there are many popular novels around which are purely plot-driven, with shallow, rather doubtful characterisation, and some of them sell extremely well. Perhaps one day sheer penury may drive me to write something like The Da Vinci Code, but in the meantime I will write fiction which tries to examine human nature. I see plot essentially as a vehicle to this end, because I believe that the truly great novels are really about the characters in them. This does not mean that I do not consider plot important. Of course it is! It is the framework upon which I hang my analysis of the human mind. Recently I published a historical thriller, The Scottish Malcontent, and the reviews I have received so far – all unsolicited, I hasten to add – have highlighted the quality of characterisation. This came as no surprise to me as I spent a serious amount of time making sure my characters (a) were rounded and credible, (b) that their characters were revealed in detail over the course of the novel, and (c) that their characters changed over its course.

(a) Rounded and credible
I quickly lose interest in any narrative in which the characters are not credible. For this reason, I will ensure that my own characters act in ways compatible with their natures. Yet at the same time there should be apparent contradictions within them to be resolved over the course of the action if they are to be truly rounded characters. In The Scottish Malcontent, for example, the protagonist is a revolutionary driven by his political convictions. He is in essence an eighteenth century terrorist and yet he is also clearly a moral and principled man. It is in the rounding out of his character, and in particular the reconciliation of the apparent contradictions within it, that much of the novel's real depth lies. In my writing I try to examine the reasons why people behave in the way that they do. Nothing interests human beings as much as other human beings; I believe that any writer who aims to do more than simply entertain must examine the human condition.

Every writer must choose their own way of developing his or her characters; there is no 'right way' of doing this. Clearly, my methodology may not be appropriate for others, and there is after all a wealth of advice available on the web on how to evolve and develop characters. I will say however, that I spend a lot of time thinking about the characters before ever a word is written. In The Scottish Malcontent, I began with the protagonist. I identified the sort of person I wanted to write about, I reflected upon which aspects of his character I wished to explore, and then I built the plot and the other characters around him. In my research I tried to identify every aspect of my fictional people in terms of the world they inhabited, the people they met, the work they did, their beliefs and philosophies (and how those came about), their fears, hopes and dreams. Only when I thoroughly understood them and knew everything about them did I begin to write. A recent Tweet by Frank Delaney (@FrankDelaney) read: 'Do you know the date of your protagonist’s mother’s birthday? You should.' This is quite right, in my view, and long before I have developed a plot in any detail I will have drawn up a complete biography of my characters.

(b) Revealing my characters
It is customary to offer the reader some early notice of a character's nature, as well as a physical description of course, but I feel it is important not to give away too much, too soon. For me, the history of the character, which is after all the record of how people become the people they are,  should be revealed as the work progresses, with the reader made to work a little for insights. I avoid dropping huge amounts of back-story on my readers at any one time, and whilst revealing their histories I try to ensure as many questions are raised as answers provided. They should reveal themselves gradually through their speech and their actions. In this way the reader gets to know them by the very means by which people get to know other people in real life. The result is an organic process of familiarisation which feels right and natural, and which I believe makes the characters feel 'real'.

(c)Changes in character
We all change, all the time. As a writer I am interested in the forces that act upon human beings to change their natures and their characters. In my view it is the interrelationships between people which are most powerful forces of all. It seems to me that an important part of the author's role is to examine both how and why people change, and in what ways. For example, in The Scottish Malcontent my protagonist acquires a new set of personal priorities as a result of renewing old acquaintances (in particular, that of a former lover) and of a dangerous and testing personal crisis. It is a profound change; he moves from a state of permanent world-hatred to a happier, more contented state of mind. At the same time, character changes must be credible; they must stay true to the deeper nature of the characters if my readers are to 'swallow' them. As ever, I try to reveal these changes by the actions of the characters themselves rather than through the narrative voice. I try to allow the reader to chase down the clues and form an impression rather than simply be told. For me, a great part of the joy of reading any work of fiction is being made to work a little.

In this brief post I have avoided any real attempt to explain my actual writing processes. My purpose here has simply been to set out my priorities in writing and offer some justification for them. If I have done that I am very content, but I also hope that this post may encourage other writers to reflect upon their own priorities in their approach to their work.