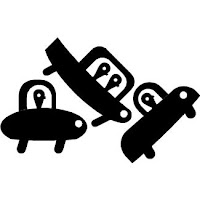 Monday November 14, 9:33 am
A matronly woman with tight orange curls, driving a forest green Pontiac Sunfire, honked and then gave me the finger before flying right past me.
“For goodness sakeness,” said Kumar, the foolishly brave soul who had drawn the short straw and ended up being my driving instructor. He grabbed the wheel and steered me back into my own lane.  “You must be checking the rearviewing mirrors every time, all the time.  Always I am reminding you: signalling, checking mirrors, shoulder checking always.”
“Yeah, yeah.  I checked.  I just didn’t notice her.  That car came out of nowhere,” I protested.
Today was my third in-car driving lesson, but because of band rehearsals, I had missed the last two classroom sessions.  I was a bit confused about rules for things like signalling and changing lanes.  The video they’d shown in the first class made driving seem so much easier than this business of being on the multi-laned Don Valley Parkway.  Perhaps they should have sped up the video to make it seem more real.
“Always every time, you must do the signalling, and you must do shoulder checking, and you must looking in the rearviewing mirrors, every time always.”  Kumar had given up a life of answering phones at a Mangalore call centre in order to immigrate to Canada and risk his life teaching me how to drive.  If I were him, I’d be sorely missing the days of answering idiotic tech support questions from the safety of a brightly lit cubicle.
All right, so I’m in my early thirties and I don’t really know how to drive, and I’m finally going to try to get my licence.  In my last couple of major cases, my lack of wheels had been slightly problematic. Being sans licence hadn’t exactly deterred me from “borrowing” dad’s car, but it would be decidedly uncool to get pinched for driving without the appropriate paperwork.  Besides, a tough-as-nails sleuth loses a bit of her edge when she has to dig through her purse for a subway token.
“Okay, okay.  Just help me get out of this damn death trap.  I forgot my sunglasses and there’s too much glare.” The bright yellow sun in the low-lying late autumn sky seemed a good cover for my lack of preparation and nervousness.  “I’ll try the highway again tomorrow, I give you my word.”
Kumar looked as if he hoped my word was worthless.
I pulled into the parking lot of the Dairy Queen on Broadview Avenue and switched seats with him.  Kumar let out a sigh of relief as he buckled himself in behind the wheel.
“You must not be forgetting your sunglasses tomorrow.  And you must do the reading of the driving manual tonight.  Changing of lanes is very important, very important.”
“All right.  Got it.  I’ll be ready for tomorrow, for sure, but since we’re cutting the lesson short today, how about dropping me off in Regent Park?”
While Kumar drove us back downtown, I made use of the downtime.  I opened the browser on my smart phone and tapped in “York University.”  I knew that Kitty Vixen/Julie McPhee’s father taught there.  The faculty webpage indicated that Dr. Wayne McPhee was a senior Professor in the Department of Social Sciences.  He specialized in the History of Organized Labour, and he was widely published on the subjects of workers’ rights, labour movements, equality in the workplace and so on.
I dialed the phone number they had listed for him, fully expecting to get his voicemail, and was pleasantly surprised when he picked up.  I explained who I was and why I was calling.
“I’m so glad to hear that someone is focusing on Julie’s death,” Wayne McPhee said.  His voice was a little on the nasal side, and he spoke rather quickly.  “It was so heartbreaking, such a shock.  Her mother will never be the same again.”
“I can only imagine. I’m really sorry for your loss.”
“Thank you.  You’re going to think I’m terribly callous, but I’m running very late.  My class started about five minutes ago.  If I don’t show up, the students will think today’s lecture has been cancelled.”
“Not to worry.  I’ll try you again later,” I said, and bid him adieu.