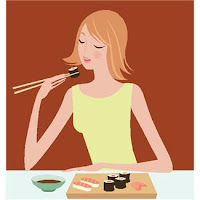 Saturday, 6:22 pm
“I think I’m developing a taste for ume fruit,” I said to Derek, the very sexy lawyer I’ve been dating since August.  We were at Izakaya, one of the best sushi restaurants in Toronto.  Derek had ordered a small carafe of Umeshu, a Japanese wine made with Asian plums.  “And it’s a nice change from sake.”
“It’s a little sweet for me,” he said, “but it goes nicely with this.”  We were sharing a plate of tempura veggies and munching on edamame.  “So tell me about your new client.”
“God knows what’s going to crawl out from under the rocks this time.  A former porn star has hired me to investigate the death of her former roommate and fellow porn star.”
I gave him a thumbnail sketch of the case.
“I vaguely remember reading about it in the paper.  Was in September, wasn’t it?” he asked.
“Yes.  Almost exactly two months ago.”
“That’s going to be tough.  You know what they say about the first forty-eight hours.”
“Yes, but that doesn’t discourage me.  The poor girl died of a particularly nasty beating.  Just think about that:  Someone, probably a guy given the manner of death, used his hands - only his hands! - to end her life.  No gun, no knife, no nothing.  Just beat the life right out of her with his fists.  It says a lot about the killer’s rage.”
“It also says a lot about what kind of case this is, so please be careful.  Something like this could get really ugly,” he said.
“It already is, I mean besides in the obvious way.  The porn industry is a nasty world,” I said.
“I know.  I worked on a trial several years ago, just after I had finished articling, that touched on the adult entertainment industry, and it was horrible.  Just about made me want to change careers.  What got to me most was learning about the ways the movie guys lure in the girls who make the movies.”
“Uh huh...”  I took a bite of the spicy tuna roll, made spicier by a big dot of wasabi on top.  I swear that’s the real reason I eat sushi.  I love wasabi so hot that it clears your sinuses.
“It’s basically the same tactic as a pimp uses, or even a dealer.  Get them hooked, and reel them in.  In prostitution, the pimp makes the girl feel special, tells her he loves her and plays upon her guilt if she says no.  In adult movies, they manipulate them basically the same way, except they’ll make the girl feel like she’s a star, tell her she’ll be famous and have tons of fans.  It’s pretty awful.”  He reached over for a maki roll and piled some pickled ginger shavings on it.
“Yup,” I said.  “What disgusts me most is that these guys zero in on girls who are already weak or victimized, you know, like runaways and addicts, or girls from abusive relationships.”
“They exploit the vulnerable.”
Neither of us said anything for a few minutes, until the waiter came by to clear our plates.
“May I show you the dessert menu?” he asked.
“Not for me,” I said, and Derek shook his head too. I checked the time.  “Actually, I’d love a green tea, and then I’ve got to run.  We’re setting up at eight-thirty.”
“So, are you ready for tonight?  Do you get excited or nervous before a gig?”
“Excited.  Being on stage gives me a rush.  I don’t think I’ve ever felt nervous when it comes to music and singing.”
Two or three times a year, my band-mates from The Calamity Chain and I get together to play a one-off gig at a Toronto bar or maybe a wedding.
The Calamity Chain was slated to play The Horseshoe Tavern at ten tonight.  The Horseshoe, one of my favourite bars on Queen Street West, opened about sixty years ago as a country and rockabilly bar, but it’s changed with the times.  Over the years, it’s offered everything from ska to punk to alt rock.  As a musician, it’s always fun to play there, and as a customer, I know that I can drop by there anytime to hear some good music.  I was really pumped for tonight since we hadn’t played a gig since Mick’s high school reunion a couple of months ago.
“A few of my buddies are going to meet me there later on,” Derek said.  “They think it’s cool that my girlfriend’s a rocker chick.”
My girlfriend?