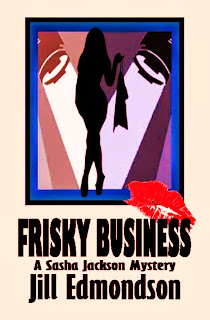 I wanted something similar in style to the previous books.

I'm happy with the image, the font and the colouring, plus to me it matches what's inside.  YAY!


Here's the synopsis for
FRISKY BUSINESS

However, Kitty’s roommate and former co-star Raven Greywolf wants answers, so she hires Private Investigator Sasha Jackson to find out just how dirty the adult film industry really is.

As Sasha traipses through the back alleys in the world of adult entertainment, she realizes that a worthless nobody can be quite valuable after all, and that both dreams and ambition are priceless.

FRISKY BUSINESS will be available on AMAZON on December 1st.