Where is Who... What??? by guest author Lisa De Nikolits

Geography, space and location are vital characters in my work, and more often than not, they share equal value and weight in the storyline as my protagonist, and it’s from location and setting that my ideas are birthed.

I hadn’t realized the degree to which this was true until a reviewer pointed it out and I took some time to consider it. 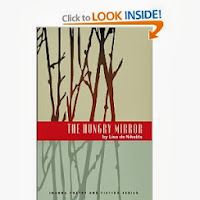 My first novel, The Hungry Mirror dealt with matters of space and landscape in a way that might not seem immediately apparent – the protagonist’s body was her uncomfortable prison of residence and she examined this intimate country as closely as any cartographer doing daily checks of the valleys and hills.

Without this landscape, as well as the geography of her disturbed psyche, I wouldn’t have had a book.

My second novel, West of Wawa featured Benny, an immigrant from Australia who takes embarks on a road-trip journey across Canada, travelling from Newfoundland to Vancouver, by way of Churchill, Yellowknife, and Whitehorse.

I did that journey and I kept a journal with no intention of the jottings ever burgeoning into a novel and when it did, I based the protagonist on my adventures, only to be told that the lead character was vacuous and her story banal. But the setting was heroine already, serving as a skeletal structure for the novel, and ‘all’ I had to do was come up with a new character and a gripping plot.

Next up, my third novel, AGlittering Chaos would not have happened but for Las Vegas. My husband and I were there on a brief holiday and he bumped into a woman in the elevator who couldn’t speak English.

Both Las Vegas and a small town in Germany played pivotal roles in the plot of this story, with both locations helping to shape my characters decisions and actions.

And in my fourth novel, due to be released by also Inanna next year, geography is continues to be key. TheWitchdoctor’s Bones is about a group of tourists who travel from Cape Town to Windhoek through Namibia, with murderous consequences and once again, I got the idea by actually taking the trip.

The plot sprang from two things: a poisonous bush and a man who snored like a fiend the entire holiday. I thought that if life were a novel, someone would poison the man just so we could all get a good night’s sleep and from that single idea sprang a novel which, at first draft, weighed in at 220 000 words.

Now, respectfully halved, the novel will hit the shelves Spring 2014.

The next project I am working on features a young woman who loses her job, her boyfriend and her home and finds sanctuary in an abandoned old school. Between The Cracks She Fell tells the tale of Joscelyn and her adventures. Once again, I got the idea from an abandoned old school I stumbled upon; “Imagine living here,” I said to my husband, “imagine!”

So, for me, location is key, where is who, and if ever you are experiencing a case of writer’s block, take a trip and ask yourself “imagine if…,” — you’ll be amazed by what fantastic stories can follow!

Follow Lisa on Twitter @lisadenikolits
And check out her books on AMAZON
Posted by Jill at 12:30 AM