Yippee!  I have a new release on Amazon Kindle!  I'm trying something different, something I haven't done before: I'm releasing a mini-book containing two short stories and three little poems.

The collection (that seems like too big a word for this brief project!) is called RAT BASTARDS AND TEAPOTS.  It's the first of three such works that I plan to release between now and Christmas.

The two short stories are The Locket and The Eraser.  The Locket is a story about the two photos in the locket and how they affect the owner.   The Eraser is about a man who wants to make a clean start with his life, but he has a very messy way of doing it.

The three short poems are: Murder without a Clue, Last Words from the Corpse, and Cozy Mysteries, and all three are a little bit tongue-in-cheek. 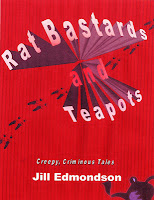