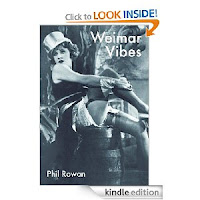 For Weimar Vibes on Amazon click here.
Jill:  When I began research for this interview, I immediately came across the cover image for Weimar Vibes.  Love it!  How and why was this image chosen for the book cover and what does the image say about the story?
Phil: This is a fabulous shot of Marlene Dietrich in Josef von Sternberg’s 1930 movie, The Blue Angel. I licensed it for the cover of Weimar Vibes because I think it gives a feeling for how it was in the final years of the Weimar Republic – decadent and crumbling, yes, but with a lot of enticing temptation in the night life! My Weimar Vibes story is a dark humour thriller that mirrors elements of 1930s German chaos in the UK and the rest of Europe tomorrow, and I think that Marlene in The Blue Angel gave a great snapshot of this period – as indeed did Lisa Minnelli in Cabaret.