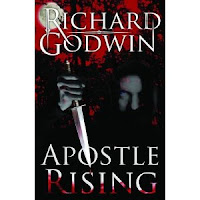 Jill: “Apostle Rising.” Love the title!  Give me the one sentence pitch for the novel.
Richard:  You have just met the darkest hybrid imaginable and your world will never be the same again.
Jill:  More on titles.  Some of your story titles include: “I’m a Lasagna Hog,””Go Hang a Salami,” “Kentucky Ketchup,” “Okie Onion,” and “Fresh Bacon.”  Do you write when you’re hungry?  I’m suddenly craving a hoagie.
Richard:  No I think food is essential to narratives, we are all part of the feast, the question is who is the host?
Jill: In addition to writing short stories and a novel, you’ve also written a play. “The Cure-All” was staged in London.  Is it hard to switch between forms/styles/genres of writing?
Richard:  I love doing it. The truth be told if I had to write one genre all the time I would get bored.  I like my writing to stay fresh, vital, like freshly baked bread.
Jill:  You’ve published a number of works in online periodicals.  What is the most satisfying thing about publishing on the internet versus in good old dead-tree print?
Richard:  I think it’s the feedback. There is an army of fine readers out there who are immensely supportive.
Jill: You’re a member of “International Thriller Writers.” What have your learned about your craft from this organization?
Richard:  It’s not so much a matter of learning from them. It’s more a useful vehicle for getting your name out there, as is the CWA, which I am also a member of.
Jill:  What has been the most surprising thing to you about the business side of publishing?
Richard:  Learning that the distributor is key.
Jill:  Somewhere in a desk drawer or at the back of a closet, you probably have an early, unfinished draft of something from when you were just starting out.  What unfinished project would you like to finish someday?
Richard:  There is a novel about a retired Detective who moves to the English countryside. Say no more but a nod is as good as a wink to a blind bat.
Jill:  What authors have influenced you the most?
Richard:  Dostoyevsky and Leonard.
Jill: What part(s) of writing (i.e. plot, dialogue, character, etc.) are most fun for you to work on?
Richard:  When the novel comes alive and takes on its own route.  You have to listen to what the characters are telling you.
Jill:  You’ve got a lot of stories out there, and it’s almost unfair to put you on the spot, but I’m going to anyway:  Name two of your favourite works.
Richard:  In terms of online publications The Mustard Man and Pony Trip.
Jill: The last question is kind of a freebie: What question do you wish I had asked you? Now go ahead and ask & answer that question.
Richard:  What do I see as the future of publishing?
The breakdown of the economically driven search and sell mechanism that has reduced sales to celebrity books that are not fit to read, eventually this will change. And I say this as someone who has been traditionally published and continues to be.  The big houses got greedy and fat and lazy and stupid. Apostle Rising sold foreign rights as a debut, so it has been successful as a first novel.  I think the E Book will shake things up. It will make the industry re-evaluate what publishing is really about. Economics dictates certain lines of reasoning. And decisions based on it are not in favour of Art.
For more on Richard Godwin, check out his website or follow him on Twitter @stanzazone
Richard's books are available on Amazon, Barnes and Noble, and many other sources.
Posted by Jill at 9:27 AM