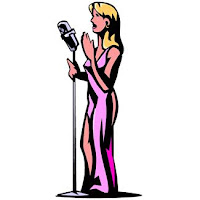 Saturday 11:04 pm
The first set went off without a hitch, other than a broken guitar string during the fourth song.  For  the first half of the show, we always play cover tunes, mostly rock from the Sixties, Seventies and Eighties – just about anything teenaged guys put on when they’re playing air guitar.
The set opened up with Gimme Shelter, and from there we never looked back.  I camped it up next with Pat Benetar’s Hit me with Your Best Shot, and then stretched my vocal chords with a Van Halen tune, followed by some Blondie, Bon Jovi and finished the first half with Aerosmith.
The bar was full and we played to the crowd.  Whenever I perform, I always find that I draw my energy from the audience, and tonight they were giving it.  Or maybe just a lot of them were drunk.  I noticed Derek and his friends off to the side and smiled at them.  I knew that during the break, he’d want to introduce me to his pals and I felt a bit awkward about it.  It had been a long time since anyone had called me their girlfriend.
“That was fantastic!” his friend Paul said when I joined them between sets.  “I haven’t heard some of those songs in years.”
“Thanks.”
“You sound really great,” said his friend in the brown shirt whose name I didn’t catch.  “Derek told me he was dating a singer, but I didn’t expect that you’d be doing hard rock.”
“Thanks guys.  Listen, sorry to rush off, but there are a couple of other friends I have to say hi to.”
“Sure, go do your thing.  We’ll have time later.”  Derek gave me a quick kiss and I wandered over to chat with a couple of neighbours who come to see me every time I play.
For the second set, we did all our own stuff.  Most of our original songs come from Mick, who has both a knack for lyrics and a knack for coming up with good rhythms and catchy melodies, unlike me.
The good thing about doing our originals is that Mick does some of the vocals, and the good thing about that is that it gives me a chance to sit in on the drums for a few songs.  I know there are people out there, much more talented than I am, who can drum and sing at the same time, but that just doesn’t work for me.  At least not in public.  I find I can only really give my all to one of those things at a time, and singing is what I’m better at.  Still though, pounding away on the drums gives me a rush like nothing else does.
By the end of the second set, all four of us were exhausted but pumped.  We knocked it out of the park for the encore, with Mick and me doing a duet to the Phish and Les Claypool bluegrass version of Gin and Juice.  It’s a totally misogynistic pothead song, but everybody always sings along with it, and I get a kick out of doing something with such twang.
“Terrific show!”  Mick said, high-fiving me, Brad and Cole after the show.  “What a blast!”
“Yup, we done real good,” Cole said with a wink.  And we had.
“You guys want me to help load up?” I asked.  I knew they’d say no, since I don’t have any equipment except my mic, but I offer to give a hand every time.
“Nah, we’re good.  Go ahead and take off, Derek’s waiting for you.”
I sauntered over to the end of the bar where Derek was standing, smiling at me.  “You are one talented woman,” he said.
“Yeah, well, wait ’til we get back to your place and I show you just how talented.”

Sunday November 13, 7:37 am
Derek’s phone has an extremely annoying ringtone.  It sounds like a school bell in a tunnel.  It’s even more annoying when it rouses me from a sound sleep.
“Mmpth.  You have to kill whoever that is,” I mumbled, and then put the pillow over my head.       We had gone to bed a little after three o’clock, but hadn’t actually gone to sleep until a good while after that.
Derek picked up the phone.  “They what?”  He listened to the caller for a moment.  “Uh huh.  Where?”   He sat up on the edge of the bed and flipped on the lamp.  “How long ago?   Hang on, let me find a pen.”  He shuffled around in the nightstand.  “Uh huh.”  Another pause.     “Okay.  I’m on my way.”
He got out of bed and grabbed his jeans from the floor.
“Hmph... What’s going on?” I asked, pulling the comforter up over the pillow, up over my head.
“A client.  He’s just been arrested.”
“Mmghth... Can you call him back and tell him to get arrested after lunch...”
“Sorry, Sasha,” he said pulling on a shirt.  “I have to get down to the station right away.  You can stay here and sleep, if you want, but I’m going to be tied up for a few hours at least.”
I reluctantly pushed the bedding off me and got up.  “I may as well go home.  There’s no point in my being here if you’re gone out.”
Posted by Jill at 11:30 AM