Excerpt from The Forgotten Gemstone by Kit Daven 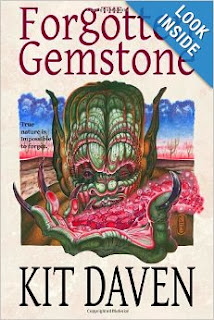 Synopsis:  True nature is impossible to forget. Ule is Xiinisi, a race of trans-dimensional world builders. Shunned by her peers and spurned by a love interest, she retreats into one of her creations, a model 24-60-60 planet remembered for being joyful. There, she discovers an ancient friend has died, the inhabitants of the world have forgotten her, and lush groves have eroded into desolate desert. Dismayed by the ill turn in the world's evolution, she decides to return to her realm only to find the path blocked. In her search for a way home, Ule discovers a darkness has settled into the world. Bisi Nomads, a man-hating tribe who roam the desert as a form of sanctuary, force her to flee into the desert where she encounters Istok, a cactus demon determined to spread his brand of fear. Bound by his magic, she becomes wracked with pain until she is pulled into a dream state. Upon awaking, she is thrust into a world which has changed yet again. Merchants and farmers struggle to rebuild after a one hundred year war and even worse... Ule cannot remember who or what she is. Surrounded by folk who encourage her to forget through hard work, food, alcohol and sex, she looks inward for clues to her identity. There, she begins to understand and nurture who and what she has always been. In her debut novel, Kit Daven combines a childhood passion for rock collecting with her ongoing fascination with demons and mysticism to create a blend of fantasy, science fiction, and some elements of horror, which explores the importance of recognizing and honoring core identity.

Kit Says:  The passage I selected is the beginning of Chapter 21.  This passage marks the beginning of two closely linked scenes that were very challenging to write. While preparing the third draft of the novel, the story called out for an additional scene or two to illustrate the final moments of a hundred year war. There was a lot to keep track of by this point: continuity details, the development of two characters (The Smith and Adinav) and the introduction of a new character (Kaleel, a cat demon), the expansion of a setting, diagrams of the fighting choreography, and further development of the Xiinisi universe in general. Once I began writing from all these notes, the words came slowly. The process was a little escruciating at first, but then something shifted in my mind, and although I was writing a little slower, ideas and words came together in such a way which gave me chills. Whenever I read these passages now, I get a thrill, not because of the gore and the fighting and the demons, but because I discovered I am the kind of writer who can work well from extensive notes and outlines while staying true to my vision and voice as a storyteller.

Brain oozed from a gash on the dead soldier’s forehead. Blistered forearms and a bloated stomach indicated the middle-aged man had been dead nearly a week. Putrefying flesh slid over bone as he lunged between toppled benches.
Swiveling sharply, a blacksmith curtailed the point of the corpse’s long sword. Weighed down by shield plates and a bulky leather apron, his thick arms and chest glistened. With skill he parried with the corpse and when the space between them had widened enough, he sank his sword into a spot just below the solar plexus.
The corpse slumped forward onto its knees. The blade twisted easily in the buttery entrails. With a soft slurp, the smith withdrew his blade, severing a tendril of energy which controlled the undead man. For a moment, the body hung there. With a groan, the magic released its hold, and the corpse crumpled onto the white marble floor.
Sweat dripped down the smith’s scarred face. He wiped his square jaw. Stubble prickled his cheeks and neck except for the end of his chin, where a thin braided beard fell to his chest. He tucked the end of it back inside the apron and adjusted a red leather skull cap over his bald head, grateful for the strange writing and the lens in the brow which showed him what others couldn’t see—filaments of light connected to the dead.
A tall lanky creature strode toward him wielding a lowered saber and spoke. “This bodes well, my friend.” Bright almond-shaped blue eyes scanned the slop of carnage in the throne room.
The smith caught his breath, reared himself up to a looming height yet still found himself a couple feet shorter than his unexpected ally.
“I’m not your friend,” he said. With sword slightly raised, he backed off, examined the room for any more possible threats then focused on his new companion.
Feline features slightly distorted a lean, human figure. Pale, slightly wrinkled flesh covered its body. Unlike others of its kind, this demon wore clothes: brown leather trousers, a belt fashioned from small bones, and a sheath slung across his shoulder.
“Adinav’s army is nearly finished,” announced the demon. He wrinkled his nose in disgust. “Soon there’ll be nothing but bone to resurrect.” He motioned to the corpses. “Why else might he raise the dead again?”
“To exhaust his enemies,” the smith suggested.
“Perhaps.” Bemused, the demon turned about to face the throne, flinging the blade of his saber over his shoulder and letting it rest there. “A century of sucking dry nearly every resource in the world, all for what? To channel magic. And all this time I thought Adinav a pig and vain to want to rule the world. To tap demon magic? Some other goal drives him, but what?”
Still cautious, the smith wondered too. Getting close to the Grand Magnes had been difficult. And for the last decade, the ruler had locked himself away in the heart of the castle, surrounded by his closest confidantes and inner court noblemen.
“You’re Kaleel right?” The smith lowered his sword. “The one who’s been freeing demons from Adinav’s control. How is it he hasn’t manipulated you?”
The creature flashed a smile that deeply curled the tips of his thin lips and elongated a rounded maw protruding from a human shaped head. “I have a certain charm.” 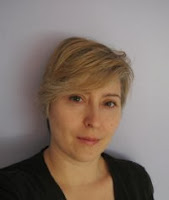