Excerpt from A Glittering Chaos by Lisa De Nikolits 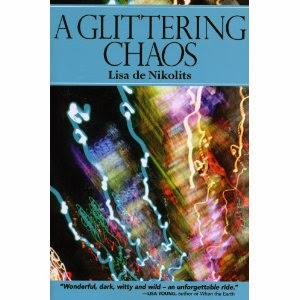 I loved working on this particular passage because it was about a book being written within a book and I often feel the way Melusine feels – carried away by the story, as if it's coming from somewhere other than me and I am merely the conduit, an eager reader keen to see what happens next.

Melusine finds that once she starts writing, she cannot stop.
Hans notices her pounding away on her antiquated computer and asks what she’s up to. She tells him she’s writing a book and to her surprise, he’s very supportive.
“I always thought you’d be a very good writer,” he says. “What’s it about?”
She can’t tell him. “I’m trying to write an existential story. A sort of plotless fiction piece with obscure internal narrative.”
“Ah. I have no idea what you mean by that but I wish you good luck.” And they both laugh.
He looks at her and feels guilty about his secret life with Juditha but then he remembers Melusine’s infidelity and his guilt vanishes. He still has to work very hard at not lashing out at her for what happened but he doesn’t want to risk destroying their fragile peace. Once again, he pushes thoughts of her affair to the back of his mind.
He’s disappointed because Juditha doesn’t seem to be making much progress with finding Kateri and she’s costing him a fortune. He’s decided, without telling her, to give her a time limit; she’s got until March to deliver the goods.
Melusine looks at her husband as he leaves her study, and she marvels at the duplicity of their life. She’s certain he’s riddled with secrets while she’s got her lockbox carefully stored under a pile of old shoes in her closet; a box filled with letters and photographs of her taken by Gunther, for he has sent more. She never realised how many pictures he’d taken of her, not including the nude images from the McDonald’s, that she’s not yet seen.
She goes back to her novel, fascinated to find out what happens next. Her thoughts are flowing faster than her fingers can type and it’s as if she’s the last to know the plot thread; the characters have come to life and taken occupancy of her brain.
Isolde is narrow and bony, an accountant by day and hash smoker by night. With opiates her only companion, she watches endless documentaries, marveling at the oddities and braveries of ordinary people. She’s long since given up on love or even friendship; she’s a spinster at thirty and she sometimes repeats the word out loud while she lies on the sofa, holding the hash deep in her lungs; alte Junger, spinster…
There’s Yvonne, in her twenties, smooth skinned and voluptuous, her colouring from her Jamaican mother, her fine-boned features from her French father who moved the family to Germany when she was a baby.
The two women work in the same office; Isolde in finance, while Yvonne delivers the mail and empties the recycling and garbage bins.
Yvonne, who leans in too close to Isolde, and Isolde, who soon regards Yvonne’s visits as the highlight of her day.