Excerpt from With the Headmaster’s Approval by Jan Hurst-Nicholson 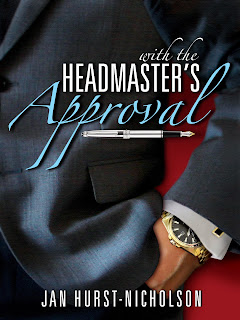 With the Headmaster’s Approval

The controversial appointment of a handsome widower and former US naval officer as head teacher of an English all girls’ school ignites sexual tension, rebellion and the unearthing of dark secrets, and changes their lives in ways none of them could imagine.
Adam Wild arrives at St Mary's Academy for Girls intent on restoring discipline to the once prestigious school. Not everyone is pleased. Jenna Murray believes the headship should have been hers and undermines his authority at every turn. They fight a growing sexual attraction - until a troubled girl makes a shocking allegation.
Then Nicole, his late wife’s kid sister returns from Africa with a life-threatening condition and a startling request he’s unsure he can fulfil, forcing Adam to re-evaluate his feelings about love.  Lust shouts. Love whispers. Only the heart knows the difference.

The theme of the book is how a lone man changes the dynamics of the relationships between the women when he joins an all-female community.

In this passage I wanted to point out how women behave differently towards each other when men are around.

Barbara Crook, one of the teachers, is an outrageous flirt and is out to capture Adam, but he is wise to her and knows exactly how to handle her advances.

Adam continued to confuse the staff by changing seats in the staff room, and on this afternoon break Barbara Crook was sitting opposite him flipping through one of her women’s magazines scanning for new recipes, but also alert for articles of interest. “Here’s an interesting snippet,’ she said, settling down to share it whether or not anyone wanted to hear. “It’s titled -How to Tell If He’s the One. You can tell a man’s personality,” she read, “by the way he drives a car. You can tell how he will treat his wife by the way he treats his mother. And this is the interesting bit.” Here she paused until everyone, including Adam, was obliged to look up from what they were doing to listen. “You can tell how he will make love by the way he eats his food.”
Lauren Mathews snorted. “That’s true. You should’ve seen the way my ex gobbled his food. And he thought a belch at the end was the ultimate in a show of appreciation.”
They spluttered with laughter and Barbara Crook asked, “And did he fart after sex?” But the laughter trailed off to an embarrassed silence when they remembered Adam was there, apparently engrossed in a crossword.
“Don’t mind me,” he said, “But from now on I think I’d better eat my lunch alone in my office.”
Lisa had to admit that the atmosphere in the staff room had changed since Adam’s arrival. The companionship and camaraderie of the all-female group that sometimes erupted into girlish laughter was now absent. The faults and foibles of husbands, and men in general, were not mentioned, and medical conditions no longer discussed. The risqué jokes and innuendos, which sometimes met with disapproval but were tolerated because they were invariably funny and sometimes had them all in hysterical laughter  - after they’d been explained to Annette Woolf, did not seem appropriate in the presence of a man.
Men did not want women to be one of the lads; dirty jokes were their domain and a woman telling a dirty joke could be met with silent disapproval, even if the men repeated the joke to their friends and fell about laughing. Women felt they should be on their best behaviour around men, afraid of their disapproval if they discovered what groups of women really got up to.
But women do behave differently when there are no men around. She remembered the time when Eleanor Stannard had shocked them all by suggesting that the electrician who was rewiring the classrooms did not wear underpants. “How on earth did you come to that conclusion?” Jenna had asked. Flustered and turning crimson, Eleanor had offered the explanation, “He was standing against my desk wearing loose track suit bottoms.” Raucous laughter had followed and Eleanor Stannard had never been allowed to forget it.