Excerpt from The Last Season: The Story of a Marriage by Marian D. Schwartz 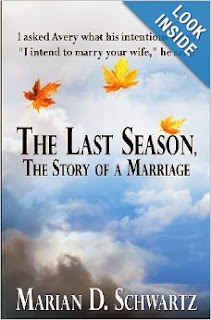 What happens when a successful, determined middle-aged man falls in love with a woman who has been happily married for twenty-seven years? If he's Avery Laird, he hires her to work for him.

Buddy Middleton is positive that the job his wife, Ginger, is offered is too good to be true, that Avery Laird has an ulterior motive, but he can't prove it. When Buddy voices his doubts and urges her not to take it, he makes Ginger feel as though she isn't worth the offer. Determined to prove him wrong, Ginger goes to work for Laird and saves him over half a million dollars in the first real estate deal she handles for his company.Flush with success, Ginger believes that the problems she and Buddy had are over. But then they have an unexpected guest from the past, a fellow named Hoot with whom Buddy played professional baseball when they were newly married. Hoot tells Ginger the true reason Buddy quit baseball, a subject they had always avoided. When Ginger confronts Buddy with what she has learned, trouble really begins... and Avery is there waiting.

When I wrote this scene, I knew that Avery Laird was courting Ginger, but she had no idea of what his true intentions were. I wanted her to be uneasy and innocent, a woman deeply in love with her husband who would never think that another man would pursue her with the intention of marrying her.


We were the last people to leave the building. On our way out, Avery apologized for the late hour. “I hope I haven’t interfered with any plans you have.”
“I don’t have any plans. The football team is playing in Camden.”
Only later, much later, did I realize that he might have known the team was playing in Camden because he reads the sports section.
“Will you join me for dinner? We can talk about the interview.”
I hesitated. It was one thing to go out to lunch with him to discuss a business deal and quite another to go out to dinner on a Friday night when my husband was out of town for the evening. “Don’t be concerned about the propriety of it,” he said. “We’ll be in a public place. I’d like to try that new French restaurant, Henri’s. I’ve been hearing good things about it. If you see people you know, you can explain that you’re interviewing me.”
“I don’t want people to know I’m interviewing you until I place the article.”
“Then you can tell them that it’s a business dinner, which it is.”
It still didn’t seem right. I was about to refuse when he added, “It doesn’t make sense for each of us to eat alone when we could enjoy each other’s company.” He smiled. His teeth gleamed as white as his shirt in the semi-darkness. The air was quite cool, and neither one of us was wearing a coat. I couldn’t take forever to make up my mind. With some misgivings, I agreed to go.
We drove in separate cars and met at the restaurant, which is in a refurbished house in town. I’d wanted to eat at Henri’s since it had opened several months before but didn’t suggest it to Buddy because it is so expensive. Even if we could have afforded to spend over one hundred dollars for dinner, Buddy would have balked. He says he can’t enjoy a meal that costs a dollar a mouthful. I was wearing a red sweater and black wool slacks, an outfit that was too casual for Henri’s and certainly not one that I would pick for business. But even if I was dressed properly and it was my only opportunity to have dinner at Henri’s, by the time I arrived I was really uneasy about eating there with Avery Laird.
Although Henri’s was elegant and the lobster bisque was superb, I didn’t relax until the main course. My salmon was too good not to enjoy.
Avery was aware of my uneasiness. I think it might have amused him. “Are you always so conscious of everyone who walks into a restaurant?” he said when I looked at two couples being seated across the room.
“Yes,” I said, “when it’s after seven on a Friday night and I’m having dinner in an expensive restaurant with a man while my husband is working.”
“You’re working, too.”
“I wouldn’t call this salmon work,” I said.
“How long have you been married?”
“Twenty-seven years.”

Check out Marian's books on AMAZON.