Excerpt from Love and Go by Wando Wande 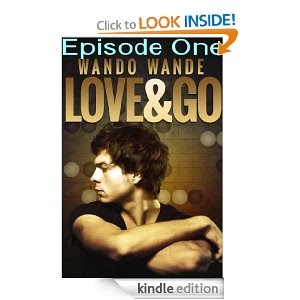 Love and Go
By Wando Wande


Winning a Go game is hard, but winning the game of love is harder.
Luke Collier knows too well he's damaged. His mom never failed to remind him of his childhood sin until the day she died. Three months after her death, he is stoned in guilt and grief.
Hao Chen-Li, a Go game genius and self-styled Mandarin Asshole is determined to shake some life into Luke by force-feeding him Go lessons. His methods are pushy and grouchy and unconventional, but they work--too well.
Their tenuous Go bond becomes an irrefutable attraction.
Luke can’t risk it; he knows too well his dysfunction. A simple bond is good enough. But simple isn't so easy when Hao is determined to make his heart submit. Even though Luke can't deny his heart's need, he is gripped with indecision: trust love's power to heal or its power to destroy?

This passage shows the first real encounter between awkward Luke and anal-retentive Hao. This chapter was exemplary of the book’s main themes, two very different men stewing in hurts, bumbling around to let go of their pasts, while clinging to their passion for the game of Go.  I liked how, in this scene, an ordinary Go game (some would call it a boring game) really showcases the characters’ true personalities. Also, the several layers of conflicts and the slight turns of humors were fun to write. Humor isn’t easy for me, but I find that with the right crucible of characters, humor flows more naturally.


The particulars of Hao’s dating profile were easy to fill: Forty, lawyer, salary—declined to say. Favorite books: The History of the Decline and Fall of the Roman Empire by William Gibbons. Favorite movies: Tous les Matins du Monde. Favorite music: L'Incoronazione di Poppea. About me …
The section knotted Hao into a sticky gumball. He put aside his laptop abruptly and shot up for a deep dash of breath. The potted bamboo at the far corner of the balcony beckoned with its pasty-yellow leaves and its crinkly brown sheathing the stems. His ex, Ricardo, had warned him jeeringly about his lack of affinity for green things, and this was the result: an imminent death.
Hao squashed himself back into the chair and opened his laptop again. His cheeks glowed with its bluish light, the cursor blinking in the About Me box. This should be simple, he thought.
Just looking to share my home and heart with the right man.
Those words bled with vulnerability and sentimentality, unfitting of a Mandarin Asshole. His mind segmenting into the deep dark night, he cracked himself for the precise and respectable way to say, “Hello, I’m Hao. Let’s fuck make love.”
He moaned to the stars, gritty ghosts, above the dark tree crowns. Falling back against his chair, he clicked furiously through ludicrous handles names and avatars of shooting dicks reticulated in pink. The lone abstract-looking avatar, a knife daggering a peach, piqued him despite the overtones of atavistic bravado in the username TheAssManCometh666.
His phone rang. Clicking through the profile mindlessly, he answered, “Hao Chen-Li speaking …”
“Hello. I hope you don’t mind, sir, that Brett gave me your number. I don’t believe we have met formally. I’m Luke Collier from the Go club.”
Luke’s words died on Hao, for he was faced with a big, blunt, black flag hanging at half-mast and a man’s face tight with a sneer of marine warrior ferocity.
“Would you be making it to the club today,” Luke asked.
Hao licked his lips and repositioned his hot laptop for more comfort. “I won’t be coming until further notice.”
“I’m sorry to hear that, sir. Zoë will be sad too. She really wants to play you again.”
“Perhaps after she memorizes all the games of Go Seigen. Now if you’d excuse me.”
The phone dropped, Hao wriggled his fingers in anticipation of squeezing those corded braids of muscle. But the profile indicated nothing of parity between them except for the scant, ‘You know what I want, you know what you want. MESSAGE ME.’ This was an ultimatum to the Mandarin Asshole.
Dear TheAssManCometh666, I am a great admirer of your titan physique. It is truly without peer. May I inquire as to your exercise regimen over drinks?
The letter impressed him with its veiled intent, but as he was about to send it, his phone rang.
“This is Luke again. There are over a thousand games by Go Seigen. Surely you don’t mean all of them …”
Some static of grumbling carried over from the phone and then a piercing whine, ruining Hao’s southern glow.
“Yes, I meant all of them,” Hao said.
“I think this would be too hard for her, sir.”
“I memorized two games a week for five years. Believe me, given the right motivation, it’s very possible.”
“Sir,” the low voice grated Hao with its sleepy insistence, “two games a week would amount to over one hundred games a year. It’d take over ten years. She’d never get to play you.”
“You don’t say. At least, she’d have grown to be an excellent player worthy of someone else’s time. Now, if you’ll excuse me.”
Hanging up the phone, Hao groaned, switched to excogitating. Of money, looks, and personality, one need only pick two. He had money; he should be able to lie his way to a semblance of personality.
Dawg, yo ass is tight. Let’s meet up. Obviously, not that.
Exasperated, Hao soured on these messages that would, in the end, amount to nothing. Who would care for a hairless Chinese little man with no abs? Sighing, he shipped off his original message, and then the phone rang.
“I’m really sorry sir. I’m only trying to smooth a difficult situation.” Luke’s voice inflamed Hao’s ears. He groaned.
“She feels this isn’t the least bit fair to her,” Luke continued.
“Am I obligated to play an entitled dolt?”
“No, no, of course not. There’s no obligation, only our gratitude, sir.”
‘Sir’ was nice to hear. “After she memorizes ten games then we may talk.”
“Five might be more reasonable for an eight-year-old.”
“Ten.”
“Seven.”
“All right, all right! Seven games. And don’t you ever call me again.”