Today I am pleased to have guest blogger David Lender.  Real events occasionally provide some inspiration for David's works.  Let's hear what he has to say about his newest release.

My new thriller, Arab Summer, is about an Arab Spring uprising in Saudi Arabia led by fundamentalist Shiite Muslims whose goal is to topple the Sunni Saudi regime and use its oil riches to hold the West hostage.  It's the next in the Sasha Del Mira series.  Sasha, the heroine of Trojan Horse and Sasha Returns, is a former concubine to the Saudi royal family who was recruited by the CIA as an informant, and later as an assassin.


The uprisings in Tunisia, Libya and Egypt that brought down Ben Ali, Qaddafi and Mubarak—dictators who brutally persecuted, repressed and murdered their citizens—started Arab Spring in 2011.  Since then, over a dozen other Arab states have witnessed at least some level of civil unrest challenging their governments, including the ongoing civil war in Syria between the al-Assad regime and opposition forces.

The darker side of the Arab Spring movement has recently surfaced in the form of murderous acts by Islamic fundamentalists, not against repressive governments, but against innocents.  Islamic militants now control approximately one-third of Mali and are aggressively moving to take the entire country.  Armed Islamic fundamentalists recently organized the takeover of an international oil and gas facility in Algeria that resulted in the deaths of over 35 hostages, including Americans and Europeans.


Saudi Arabia is considered one of the most stable regimes in the Arab states, but the notion of an Arab Spring uprising there isn't so far-fetched.  Protests, some with 70,000 participants, over anti-Shiite discrimination, labor rights, release of prisoners held without charge or trial, and for equal representation in key government offices began in Saudi Arabia in 2011 and continue today.

Imagine this: A group of disaffected Shiite Muslim extremists seizes the Grand Mosque in Mecca—Islam’s holiest site—during the final days of the Hajj, the annual Muslim holy pilgrimage, and take thousands of hostages.  Their leader says that among them is the Mahdi, the prophesied “Redeemer of Islam” who will drive out all infidels from holy Saudi soil and lead Muslims into a new era.  They broadcast their demands from loudspeakers on the mosque’s minarets, including ceasing oil exports to the US and the expulsion of foreign civilians and military personnel from Saudi Arabia.  Saudi forces try unsuccessfully for weeks to retake the mosque, sustaining heavy casualties.  The Saudis ultimately enlist the help of foreign military forces to drive out the militants.


In Arab Summer, something like that happens again.  Saif Ibn Mohammed al-Aziz, a ruthless terrorist, leads a Muslim fundamentalist group bent on a bloody coup of the Saudi Arabian government via an Arab Spring uprising.  As a prelude to his plan, he has Sasha Del Mira’s husband, Daniel, murdered.  Sasha comes out of retirement to avenge Daniel’s death and to help Tom Goddard, her old mentor at the CIA, stop the plot, putting her face to face with Saif, her former ally—and lover. 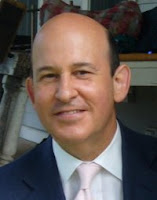 David Lender is a former investment banker who spent twenty-five years on Wall Street.  His first three novels: Trojan Horse, The Gravy Train, and Bull Street turned him into an e-book sensation.  His other novels include: Rudiger and Vaccine Nation.  More on David can be found at www.davidlender.net or at his Amazon author page.  Follow him on Twitter @davidtlender
Posted by Jill at 1:00 AM