Guest Blogger Margaret Johnson: Did you hear the joke about the writer who walked into a bar...?


Guest Blogger Margaret Johnson: How far would you go in the name of research?

On Tuesday 21 May 2013 I went to London to perform a 3-minute stand-up comedy routine at Up the Creek in Greenwich to an audience of around 200 people. Why? Had I gone completely out of my mind? No! It was part of my research for The Dare Club – the novel I’m currently writing.

I know what you’re thinking – you’re the writer. You didn’t have to make her do stand-up. That’s true, I didn’t. So I guess I might have had a deeply hidden desire to do it. Anyway, it was a completely amazing experience. My 3-minute performance followed on from a weekend course that taught me the basics of writing and performing stand-up and, most importantly gave me the opportunity to speak into a mic in front of a group of people.

I never really intended to go back to do the performance, figuring that the weekend course would give me enough of an insight. But I felt strangely compelled to complete the challenge. After all, Colette was going to do it!

On performance day, we had a go on stage before the audience arrived. It was a shock. The lights were so bright; you couldn’t see anything at all! How the heck was I supposed to choose someone to deliver my punch lines to? Then followed a period of tense waiting and feverish practising upstairs. Finally it was time. We went downstairs – to find that the comedy club was completely packed out! The audience were friends and family of us rookie comedians, and some people had invited 30-40 guests! Mad! I’d only invited one friend. I could see her right at the front, her video camera at the ready.

While I waited to go on, I couldn’t sit down. I was too pumped up with adrenalin. Just before the MC announced my name, I did a few jumps and arm swings, limbering up. I expect I looked like a fool, but that was the least of my concerns at that moment. 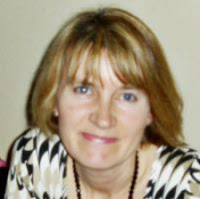 Then it was time. And amazingly, a feeling of calm settled over me as I went up the steps to the stage. We’d been told to take the mic out of the stand and to put the stand behind us. I did so – it took an age. But then I looked out at the invisible audience, said ‘hello’ and dived in.

I didn’t have the mic quite in the right place to begin with and I forgot to include one of my jokes, which meant the one that preceded it didn’t work quite so well.

But I loved it! People laughed and it felt amazing. I didn’t want it to end. And when total strangers congratulated me later, I just felt so proud of myself. All the next day, I couldn’t stop smiling. And on the train home, I was already writing the scenes with Colette’s experience of stand-up in my head. I could never have made them so vivid if I hadn’t actually experienced it.

Would I do it again? You bet your life I would! In fact, I need to seek out opportunities to make it happen.

And Colette? How is she going to get on? Well, she’s going to have a mixed ride. She’s got a particular reason for wanting to do this challenge, and because of that, she’s going to choose to ignore some of her tutor’s advice. So it could all go horribly wrong for her… Well, it’s fiction, isn’t it? I can’t give my characters a completely easy ride.

If you’d like to view my 3-minute stand-up comedy performance, click the link below. But be warned, it contains some swearing, some lies and some smut, so it won’t be to everyone’s taste. Give it a miss if you think you’ll be offended.

http://www.youtube.com/watch?v=Fc3t--LZcsc
The Dare Club is the follow up book to The Goddess Workshop, which is available on Amazon now.
Posted by Jill at 1:00 AM