I think every writer has a favourite author who inspired and influenced them, whose works they read over and over, and whose writings they try to emulate.  The author in question is not always the best-known, and is not always au-courant, but often the author is one of the standard-bearers for his or her genre.  For me, that author would be Robert B. Parker and his "Spenser" series.  For Mark Arundel, the key author in the world of action fiction is Alistair Maclean.  Let's hear what Mark has to say about him:

Remembering the Author Alistair Maclean
Younger readers may never have heard of Alistair Maclean. After all, he died in 1987 at the age of 64 and now rests in a cemetery in Switzerland alongside the actor Richard Burton. A Scot with a background in the Royal Navy and employment as a schoolteacher, Alistair Maclean went on to write 28 novels, a collection of short stories and several non-fiction titles between 1955 and 1986. Even if someone doesn’t recognise his name, that person will probably know one of his novels because Hollywood made it in to a film: Where Eagles Dare starring Richard Burton and Clint Eastwood.

Alistair Maclean was a prolific bestseller and a hugely popular author throughout the 1960s and 1970s. One reliable source puts Maclean’s total book sales at 150 million. In the list of all-time bestsellers, that figure puts him somewhere between Stephen King and Dan Brown. Not bad for a writer whose books never contained any sex. Maclean thought that sex was a diversion that slowed down the action.
After 50 years, his books can feel dated but the high quality writing shines through especially in his work from the 1960s. My personal favourite is Fear is the Key written in 1961. It’s a twisting tale of revenge written with suspense, action and humour. 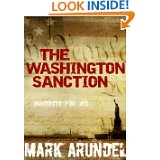 Perhaps the quote that sums up Alistair Maclean for me is “I'm not a born writer, and I don't enjoy writing.” The expression on his face when he said those words was not recorded and so, unfortunately, we don’t know whether he was serious. I like to think he was sporting a big grin. Anyway, grinning or not, in my opinion, Alistair Maclean is one of the all-time great action writers and if I was half as successful I’d be very happy. 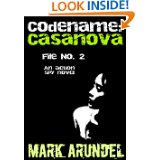 Mark Arundel was born in London and likes to travel whenever he can.

Mark plays weekly five-a-side cage football and seven-a-side carpet football. In the winter, he skis and at other times, constructs escapes to sunny shores where he snorkels among the fishes before eating one for supper. 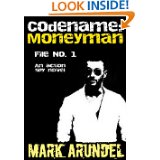 Mark is currently working on Rafferty File #2, a sequel to The Washington Sanction. He has also made a start on the plot of Codename File No.3.