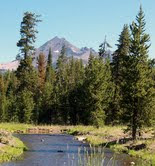 Setting can and often is an integral part of a story, but there can be different types of settings. When I started writing Sugarwater Ranch, I needed to find the perfect place for my characters to live. I’ve spent the better part of my adult life training barrel horses and competing at rodeos, most of it in the Northwest. My cowboy and I have traveled all over Idaho, Oregon and Washington, so it’s a region I’m familiar with, and the perfect place for my character’s hometown.

One reason I picked central Oregon was because of its unique landscape. Sagebrush and juniper covered mountains, lava flows and ranches with lush hay fields and pastures surround the small towns in the area. Although, Dalhart, Oregon is fictional, the rest of the towns are real.

The first story I ever wrote was about a barrel racer. The heroine’s brother had a bit part. He was a party animal and caused her no small amount of trouble. Sean intrigued me and made me laugh. I wanted to see what his story was, and if there was any way he could redeem himself. He’s tough, parties a little too much (okay, a lot too much) and thinks he was put on this Earth to ride bulls. He’s got his life all figured out until he meets Catherine.

The book is set in Oregon, but SugarwaterRanch is also set in the world of rodeo, which is as
unique to the story as any town. Most sports have rules and referees to control the game. In rodeo, nobody gives the animal a rule book. They are an unknown quantity and may buck differently each time the gate is opened.

Traveling to as many as five rodeos in a week is both exhilarating and exhausting. You learn to sleep in the truck, drive all night and take care of your animals before yourself. Rodeo people are also a different breed. They compete against each other at every rodeo, yet wouldn’t hesitate to drive for hours to help one another out.

When Sean is introduced at the beginning of Sugarwater Ranch, he’d rather climb on the back  of a one ton bull who’s only goal in life is to get rid of the cowboy on his back. Man against beast. He’s found the thing he loves most in life then he meets Catherine, who won’t settle for second best. This cowboy’s got some decisions to make.

Whether it’s a sheik’s palace, a remote town in Oregon, a billionaire’s penthouse, or a rodeo arena, the setting is the backbone of a story!

For more on Stephanie, check out her website HERE