The plot plays a major role in most thrillers and suspense novels. The structure generally needs to follow traditional conventions of the genre. The character development takes a back seat, but it is still important as an effective tool in most novels.

When it comes to plot, spy thrillers offer an almost endless supply of scenarios. The writer can focus on traitors, coup d’états, assassinations, terrorist attacks, intelligence leaks and much more. The main plot needs to be an important event or idea that is substantial and worthy of the reader’s attention for the average of three hundred pages of a novel in this genre. The main plot and the sub-plot threads should flow naturally, intertwining smoothly with the progression of the story. 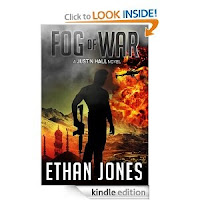 In my novels, I focus on a single major plot—for example, finding the mole within the Canadian Intelligence Service in FOG OF WAR, the latest spy thriller in the Justin Hall series—that interconnects with a host of minor sub-plots. They give a layered and richer effect to the storyline for the purpose of entertaining and satisfying readers. While there is nothing wrong with just having one plot, most stories do not take place in a vacuum and readers like to learn at least something about other events that take place simultaneously with the main plot. At the same time, minor plots serve well to fill in those places when characters need to take a break from the main storyline. In FOG OF WAR, two minor sub-plots include a theft of weapons from a powerful Russian oil baron and the main character’s relationship with his fiancée.

The structure of spy thrillers is usually more rigid because of readers’ expectation from the genre, but still it provides writers enough space and flexibility. Conflict must escalate and the main character’s situation must get from bad to worse before the climax and the final clash between good and evil, where good, of course, triumphs. Numerous variations of this scheme allow for a faster pace during action scenes—car chases, gun fights, reconnaissance missions—and for breathing room and introspection during analysis of the intelligence collected, deductions, and perhaps a bit of romance.

The majority of best-selling spy authors craft their story in such a way that the structure resembles a rollercoaster of action-filled scenes, followed by a few slower pages for the character and the reader to catch their breath. The major climax is usually placed closer to the end of the book, with a few loose ends tied up neatly in the last chapters or the epilogue. This is my preferred method, but other authors may go for a slower start, the climax somewhere in the middle, and then a slower end.

The character development allows spy thrillers to give the reader a look inside the mind and the heart of their heroes and villains, which may be difficult to achieve through plot devices. While sometimes the background story or flashbacks into the history of the characters may slow down the pace, they allow the reader to see a fuller picture of the heroes and the villains and perhaps another side of them. I try to make my heroes as human as possible, with faults, worries, and fears. My villains also are able to have sympathy, to feel love and joy, albeit for the wrong reasons. As long as there is a logical motivation for their actions, the character development of heroes and villains can only enrich the novel and deepen the readers’ experience.

For more on Ethan and his books, check out his blog HERE
Check out FOG OF WAR or the other Justin Hall novels and more on AMAZON
Follow him on Twitter @EthanJonesBooks