Excerpt from Concealed in My Heart by Regina Puckett 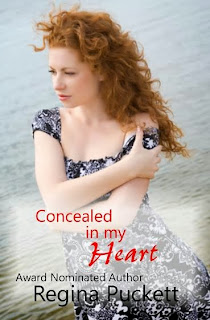 Concealed in My Heart

Synopsis: Charity Fields has everything she has ever wanted. She has just married her childhood sweetheart and has landed her first leading role in a major motion film production. But soon a terrible lie and a heartbreaking betrayal turns her life upside down, and she has to rethink her entire future. Charity realizes she needs to put some distance between her and her old love, so she relocates to California to begin a new life.

When she's faced yet again with another loss and betrayal she doesn't think her heart can handle the pain. Through it all, Charity discovers that she has strength she never knew she had, and even if she has to keep her new love concealed in her heart, she will survive no matter what.

Regina says: I like this scene because it shows my main character, Charity Fields,  isn’t perfect.    It makes her feel real and not just the cookie-cutter beautiful woman who meets the handsome man and they live happily-ever-after. Happy-ever-after should be a journey and appreciated when it finally comes.


Maria placed her hand on his arm and kissed him lightly on the lips. “Go get him, tiger. Now I’m going to leave the two of you alone. If David can’t teach you how to kiss on screen, no one can.”

David gave his wife a swift pat on her behind as she turned to leave. He then faced Charity. He took her by the shoulders and pulled her to him. Of course, the first thing she did was tense up.

“Now there’s your problem. You can’t make the audience believe you want to kiss me if you continue to stiffen up like an ironing board every time I touch you. We’re supposed to be madly in love.”

Charity laughed at his comical hurt expression, but then remembered Christopher was on the other side of the set just waiting for her to mess up again. She wanted more than anything to prove him wrong. “I’ll do whatever you tell me to do if it will get Christopher off of my back for once. I really want to do this right, but when you lean in, all I can think about is everyone is watching and it makes me too nervous to do what I know I need to do.”

David bit his bottom lip and looked thoughtful. He finally snapped his fingers and asked, “How do you make it through all your other scenes? Everyone’s watching then too.” Charity studied the front of his football jersey. It was smudged with dirt and grass. He was supposed to have just finished playing in a game against the Pittsburg Steelers. Even his face was smudged with fake blood and dirt and he was still too handsome for his own good.

It was tempting to wipe the fake dirt off the end of his nose but Charity resisted and concentrated on his question instead. “I don’t ever think about whose watching then.”

He swiped at the bottom of her earlobe and asked in a teasing tone, “So why are you thinking about them now? It’s the same thing. We aren’t really kissing. We’re actors and we’re doing what we do best, we’re acting. You have to start looking at this differently. The only thing that resembles a real kiss is that our lips are touching.”

Without warning he leaned in and spoke in the same tone Christopher usually used on her. “Now tilt your face up towards me.”

A giggle escaped before she could stop it but she immediately grew serious when he didn’t smile too.
He squeezed her shoulder and in spite of his instructions, she tensed up again. “Now get that deer in the head lights look off your face. Think about kissing Johnny. How do you feel the moment before he kisses you?”

That thought sent a shiver down her spine. Johnny was easy to kiss. Just thinking about it made Charity relax.
David grinned. “That’s it. Remember to use that look again when the camera’s on. You actually look like you want to be kissed.” He leaned in again and spoke in a low tone about each and every movement she should make in anticipation of his movements. The way he went over the scene, it made perfect sense to her. It was almost like choreographing a dance step by step.

David finally lifted her chin. “Now let’s do this exactly as we just went over it. I’m going to kiss you and you’re not going to tense up on me again. Okay?”

Charity drew in a deep breath and thought about Johnny as she leaned into David’s kiss.

When the kiss was over he let out a congratulatory, “Yes!” He nudged her shoulder with the palm of his hand. “See. That wasn’t so bad was it? I knew you could do it. It didn’t even take the entire thirty minutes. Let’s go show Christopher we can do this in one take.”

Charity couldn’t help but smile at David’s enthusiasm. She linked her arm through his. “Let’s go get this over with.”

David elbowed her in the side. “Hey. I have never had a woman less excited about kissing me before. I think my feelings might be hurt.”

For more on Regina and her books, check out the following: