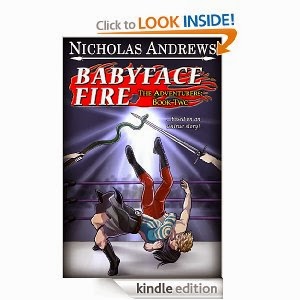 All Loebo wants in life is to lead the best team of adventurers in the kingdom, get filthy rich, and marry the prettiest lady he's ever met. Is that so much to ask? But when Loebo and the Chosen Squad set out to rescue his love from her overprotective father, he finds out a bounty has been placed on his head, courtesy of his own grandmother! While the Squad tries to unravel this mystery, Loebo comes across a wrestler-turned-adventurer named Bleg, who agrees to protect Loebo from the bounty hunters. But first, Bleg is hired to escort a young woman named Seren to her new job at OWW, Bolognia's premier wrestling league. As Bleg confronts a bitter past with the company's powers-that-be, Loebo finds himself the focal point of the biggest wrestling storyline of the year.

This passage is part of a chapter that gets into what the daily life is like on the road working for a pro wrestling organization. One of the challenges of writing Babyface Fire was working out the logistics of how a wrestling promotion would operate in a world with no television, planes, or cars. I came up with the idea that they would travel and live together in a caravan, sort of like a traveling circus.


Being in the OWW camp was like staying in some kind of wrestling shantytown. In addition to the workers and security, other personnel traveled the road as well. Some referees stood in the line of the catering wagon behind him, waiting to get their meal from the on-road chefs. In front of a wagon to his right, a blacksmith worked on hammering out a new ring post as several workers did lift training with the smith's weights. To his left, the band was rehearsing entrance songs.
In addition to Mucus and Ivy, there were other couples as well, some of whom had children that would intermittently run through the camp in innocent play. A seamstress walked arm in arm with one of the horse wranglers, and he also saw Selky stop over to plant a kiss on the cheek of Roach Hanson, the lead singer of the Eclectic Eight. It made him yearn for Alyssa's company, remembering the many times they had strolled hand in hand through the well-kept gardens of the Royal Ward in Foeny.
Chairs had been set up around a bonfire, and a number of workers congregated there to eat their meal. Loebo recognized 'Mo Tuff, Fawdry Pike and a tag team called the Twilight Feeders, consisting of Marcus Kavian and Ben Torea. Their gimmick was that of a couple of pretty boys who made the ladies swoon. With their long, flowing locks and chiseled faces, it was easy to see why. They had also apparently played vampires at one time.
“Hey, guys.” Loebo sat down with some effort. His legs still didn't seem to want to work right. All conversation stopped when he touched his seat, and they merely stared at him as he began to eat. Pike gestured toward another bonfire and all four men rose and walked away, taking their food with them.
Loebo saluted them with his spoon. “Nice talking to you.”
“Rough morning?” Seren sat down next to him, holding a salad bowl.
“What's their problem?”
“Well, most of us have dreamed our whole lives of being here, and it took us years of hard work to land a contract,” she said. “You kind of walked in and went right to the top of the card without paying any dues. Some people are going to resent that.”
Loebo hummed in understanding. “I'm not exactly running through the meadows, you know. I miss my fiancée, every time my wagon hits a rock it jars my bones, my whole body hurts... I'm all sorts of out of sorts. And what the hell is this stuff anyway?” He lifted a spoonful of the goop the cook had given him and let it dangle until it oozed back into his bowl.
“I think it's designed to keep us on a strict road diet so we can stay in shape,” Seren said. “You know, making sure we get the right nutrients and all that.” 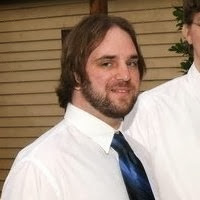