Excerpt from The Big Red Buckle by Matthew Alan Thyer 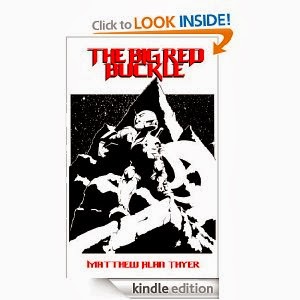 For Marco Aguilar, just being at the race's starting line represents the culmination of two years of careful preparation and training. He feels a momentary pang of guilt knowing that his wife Emma has carried their family while his focus has been elsewhere. But he also knows that winning the Grand Martian Traverse is a shared decision, not just his goal.

Petrus Mandel is a novice endurance sport athlete hoping to soar alongside Aguilar to greatness. He suspects Aguilar may have a solution to traversing the gaping expanse between the distant shield volcanoes and must face his fears and follow his curiosity.

Together, these two Martian-born endurance athletes run and soar in the solar system's greatest race.

In this scene in “The Big Red Buckle” sports broadcasters Bill Vance and Toma Crysta describe a critical moment in the progress of the race. Their focus is unquestionably on what the protagonists must do to stay competitive, and out ahead of their nemesis. However, I wanted to express the joy that comes from soaring a foot launched aircraft like a paraglider. So, I tried to describe this joy, through the lens of a camera. Marco, standing on the edge of a cliff, plays with his wing, kiting it in the rising breeze that moves up the mountain. I really enjoyed writing this, because it reminded me of why I love to fly. And, perhaps even a little more, because it required that I change my point of view and express that joy by describing the motions associated.

“And Bill, today race is all about climbing.” Pronounces Toma Crysta, again in the focus of the camera.
“I’m wondering if Mandel and Aguilar have any other wild cards to pull from their sleeves today Toma. Yesterday’s record breaking flight from the side of Ascraeus was impressive and certainly upset the plans of many racers, but will it be enough to get them over the finish line ahead of the passion and drive Greg Neal demonstrated last night?”
Two figures stand motionless with their backs facing east towards the rising sun now. At the left hand side in the field of view another figure comes into frame. This one unpacks his wing while his support team stuffs supplies into his suit. He throws a pair of trekking poles away discarding them as dead weight. Other objects are presented to him and then tossed to the side. He looks rushed compared to the two stoic figures standing motionless nearby.
One of the still figures bends over and picks something up from near his feet.
The newcomer is trying to fly his wing already as the first riffles of rising air begin to creep up the side of the great mountain. Immediately his wing comes up over his head and he turns and runs off the edge of the cliff. His wing sinks and he moves back and forth across the face of the cliff trying to stay airborne. Scratching for any lift in the light air.
The other two figures have not moved from their roost, waiting patiently for the right moment. Their moment. When a bubble of rising air will present itself and take them up and up. Periodically one of them reaches down and lifts up a handful of fine soil. Letting it slide between his fingers it falls straight down, once, then again, and yet again.
Now 200 meters below is the pilot who rushed to launch.   Still descending. As if in slow motion he slides gently down the cliff face.
Now Marco’s fully illuminated figure bends down once more. He lifts the dirt and lets it fall. It falls at an angle indicating the incoming breeze, the lifting air. Marco turns to Pet and nods once, then lifts his lines. His wing rises quickly overhead with a snap and a ruffle as the high tech fabric inflates and an aerodynamic shape comes to life.
Marco pauses with his hands on his break toggles, seeming almost to play with the wing and the wind, as the camera looks on. He dances beneath the canopy shifting back and forth to stay centered under the flying body.
Pet's wing comes up in a cloud of dust and his feet are dragged under the arcing parafoil. He struggles to slow the forward progress of the wing above by extending the break lines as far down as they will go. It is lift, a thermal grabs him and shoots him into the air. He twists around momentarily helpless under his flying wing, but then sits back in the harness and soars.
Below them Neal has found lift too. He cannot turn into it yet, being too close to the cliff face, but takes advantage of it just the same running back and forth in the rising air and climbing slowly back toward the summit far above.
Pet is climbing fast, at least 500 meters above the edge of the cliff now. Marco is still playing with his wing on the cliff, kiting it above him a little left and then a little right. Someone new runs out from the most recent rover arrival with a camera pointing it up at the orange and green canopy being danced across the talus.
Hover cameras and scouting drones are converging on the site, many of them break off from the scene at the cliff's edge to follow Pet ever higher into the atmosphere. A few are even below Neal's wing trying to get a shot of all three pilots at once.
And then, with all eyes focused on his joy in the rising sun, Marco stops playing. He turns, bends deeply at the waist and takes two big steps towards the edge turning into a human torpedo, elegant and swift, suspended under his wing.
Immediately, he's found lifting air, his gyre is tight and centered over the invisible column. A pendulum beneath his turning canopy his body rotates outside the center of the spiraling glider. The energy in this thermal is visible, Marco's rise up and away from the cliff side is quick and accelerating. Soon he is circling in tandem with Pet. Below Neal is climbing slowly. 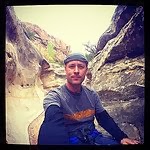 Find Out More:
Matthew Alan Thyer (1972-present) was born on the Western Slope of Colorado and grew up loving the canyons and mountains. He is an Army veteran who served as a signals intelligence analyst. Prior to finding his voice as a writer he worked as an operations engineer, wild-land firefighter, backcountry ranger, kayak guide and river rat.
Matt's hobbies include trail running, backpacking, skiing, mountaineering, bicycling, and paragliding.