Excerpt from Threaded Through Time: Book One by Sarah Ettritch 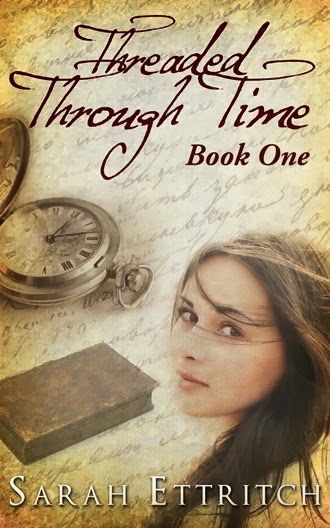 “For those who were born before or after their time...”That described Pam. She’d always felt that she’d been born too late—there was no chivalry in the world anymore. She’d only wanted to commune with the universe while reading a “moon rhyme” in the antique book she’d purchased from the local New Age shop. She had not expected guests—especially not Jasper and Margaret, summoned one hundred years into the future by the rhyme just as Jasper was proposing to Margaret. Now the displaced visitors insist that they be returned to 1910, and Pam and her roommate Robin agree. But the rhyme won’t work until the next moon cycle, and in the intervening month, forbidden love blooms between Pam and Jasper, and Robin and Margaret.


In this passage, Pam (a modern woman) and Jasper (a man from 1910) discuss Pam’s roommate Robin. Jasper doesn’t know that Robin is a lesbian. I chose the passage because it illustrates how attitudes and word meanings can change over time. When writing the book, I researched the etymology of many words. I didn’t want the characters from 1910 to use words they wouldn’t know about. As Jasper and Margaret spent more time in the present day, it became less of an issue.

His question caught her off guard. “Well, yes, for the most part. I admit, I’d be happier with a man in my life. If I didn’t have Robin, I’d be lonely. But I haven’t settled for someone I don’t love just so I won’t be alone when Robin moves out. I’d rather be lonely than settle.”

“But you want to marry.”

Shock made her voice shrill. “What makes you say that?” Wait. “Oh, you mean odd.” When he nodded, her heart stopped pounding.

“Why, because she wears her hair short and prefers pants to dresses? That’s not unusual today, Jasper. Okay, she doesn’t wear makeup or jewelry either, but so what? She’s her own person.”

“I didn’t mean to criticize her,” Jasper said, motioning for Pam to calm down.

“Then don’t judge her by how she looks!” Pam took a deep breath, reminded herself that she was sitting with someone from another time. “Listen, I can see how she might seem unusual to you. But I love her to bits. I know we’re not blood-related, but she’s family, the only family I’ve got. I’d do anything for her, and I know she’d do the same for me. So I can get a little defensive about her.”

“I apologize. Robin is a most gracious host. And so are you.”

Flattery would get him everywhere. “Apology accepted.”

“Do you think she’ll marry?”

“I hope she does.” Robin would probably marry before Pam did—if she stopped worrying about her useless family and started living for herself. Jasper’s lost love, his future tepid marriage to Margaret, Robin eventually meeting a nice woman and moving out . . . what a depressing conversation! “But enough chit-chat. Let’s shoot some pool. Or are you afraid of losing?”

He snorted and pushed back his chair.

Sarah Ettritch writes science fiction, fantasy, and mystery storiesfeaturing strong female characters. You can find out more about Sarah andher books at http://www.sarahettritch.com . You can buy Threaded ThroughTime at Amazon (http://www.amazon.com/dp/B005AJ9FJS ), and folow her on Twitter @SarahEttritch