Excerpt from INFAMOUS By Irene Preston 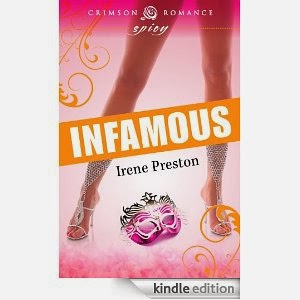 Being Jessica Sinclair meant never having to apologize for bad behavior.

Everyone knows Jessica Sinclair.  She’s that girl on the cover of all the tabloids. As a insider, Jessica has spent her life partying with A-list celebrities, shopping on , and living through scandal after scandal.  She’s certainly not cut out for playing Mom in the suburbs.  But when her estranged husband offers her a second chance at the ‘All American’ lifestyle she can’t pass up a shot at real happiness.  Back in suburbia, Jessica spends her nights in sexy role-play hoping Morgan will overlook her deficiencies as a homemaker.  She spends her days attending  P.T.A. meetings, burning cookies, and asking herself "What would June Cleaver do?"  More to the point, what will Morgan do when she winds up back in the tabloids--with his teenage daughter right next to her?

FROM IRENE:
I call this my “Paris Hilton weds soccer dad story.”  I had a blast with this couple, but when writing about a married couple, it’s sometimes a challenge to keep the tension up. I loved writing this scene because it’s a great example of the way Jessica sabotages her relationships.  Her reconciliation with Morgan is going well until Morgan puts his foot in his mouth with an insensitive remark about a gift he’s bought her.  Instead of letting him know he’s hurt her, she reverts back to her standard coping mechanism.

EXCERPT:
“It’s amazing. I love it. What’s the occasion, though?”
“No occasion, it just occurred to me that when a man has a beautiful wife he should buy her beautiful things.”
Morgan wasn’t looking at her. Instead, he lifted out the bracelet and fastened it around her wrist. His thumb lingered, stroking her pulse next to the diamonds.
“If you want a reason, though, let’s just say that you’ve been exceeding my expectations in the monogamy department. I know you said I wouldn’t be bored, but I didn’t expect you to take the job so seriously.”
She lowered her lashes so he couldn’t see the hurt in her eyes. He couldn’t mean that the way it sounded. It was the kind of thing a man said to his mistress, not his wife. She wondered if he had bought the bracelet with her in mind at all, or if he had just had the jeweler send over something in the appropriate price range for a spoiled trophy wife. The beautiful bracelet felt like a manacle around her wrist.
All her happiness in the evening vanished. Was that how Morgan saw her? A beautiful possession? Something he could buy for his enjoyment and convenience? When they first met, she hadn’t thought so. She had thought he loved her as much as she loved him. It was only later that she realized he had never said the words.
Her insecurities about moving back into his life crashed down on her. She still wasn’t satisfied with his reasons for wanting her back. Was it pride? She knew he didn’t like to fail. A divorce might have seemed like a very personal failure to him. Or maybe she really was just a pretty convenience. Why bother with a nanny and a mistress when you could get both in one package deal?
“What would I have to do to earn a matching necklace?” She thought she had hidden the little barb of sarcasm under her trademark throaty purr, but apparently she was a little off stride tonight. Morgan’s eyes narrowed and he gave her a sharp look. Then he smiled and ran his thumb up her palm, sending little shivers through her.
“I’m sure you’ll think of something if you’re motivated.”
She wanted to snatch her hand away from him, but years of playing the bad girl in public kept her calm and smiling. She wasn’t the daughter of an Oscar-winning actress for nothing. If Morgan wanted a whore, she would oblige him.
She relaxed, letting herself lean toward him over the table. She uncrossed her legs, wiggling suggestively as she repositioned herself. Sighing, she ran a calculating tongue over her lips and then caught her bottom lip between her teeth as she peered up at him though her lashes. As expected, Morgan’s eyes were riveted to her mouth.
“Got any suggestions?” she asked.
“Jessica—” Morgan’s tone was an amused warning, but his eyes had darkened with desire.
Under the table, Jessica toed off one black pump. The pumps matched the almost-demure black dress. They were almost boring, almost conservative, the type of black peep-toe pumps any woman might keep as a staple in her closet . . . unless you counted the four-and-a-half inch stiletto heel and the trademark Louboutin red sole that turned them into something else altogether.
She eased her foot out of the designer leather and slid it along the floor until she made contact with the sole of Morgan’s sensible black oxford. Very slowly, maintaining continuous eye contact, she began sliding her foot up his calf. Morgan’s eyes widened and Jessica smiled at him as her foot continued its upward journey.
“Jessica. . . .” His voice was a low growl.
She blinked artlessly.
“Morgan?”
He opened his mouth, but just then her foot finished its climb and made its way over the edge of the chair and into his lap. There was an unmistakable bulge in his trousers. She stroked delicately.
He jumped and a hand clamped over her foot. Trapped, she wiggled her toes against him, pressing down until she felt him press back involuntarily. His mouth was a grim line, but his pupils had dilated until there was only a thin band of brown around the edges.
“Cut that out,” he said.
Jessica gave another wiggle with her toes. His hand tightened around her foot.
“Are you sure, Morgan?” she said. “I want to make sure to give good value.”
Teach him to be careful what he wished for. The tablecloth wasn’t long enough to hide what she was doing. Anyone who happened to glance this way was going to get an eyeful. She smiled. If there was one thing Jessica Sinclair was known for, it was living right down to everyone’s worst expectations.

FIND OUT MORE:
Infamous will be available in US Barnes and Noble and other local booksellers on February 18, 2014