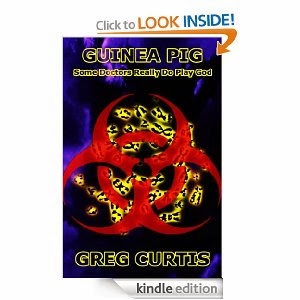 Ten thousand dollars. It was a lot of money for a simple injection. It was a lot of money for a student. And the one thing that William Simons knew about the research trial was that it was safe. Of course he said yes. But that was before he discovered that Doctor Millen had a secret agenda. Before he discovered that what he'd been given wasn't the same as what the other subjects had been given. And it was before his body started to transform into something else. Something not human. It was also before a series of inexplicable natural disasters started to destroy Los Angeles.

I particularly liked it for its over the top description as it showed the clinic room, but also because it contrasts so completely with what happens in the room. Doctors in white coats, in white clinic rooms we sort of associate with professional medical care. They are in our thoughts places where only the highest possible standards of care exist. By contrast mad scientists live in abandoned castles and underground labs and concepts like professionalism and sterility go out the window. And I wanted very much to make my mad scientist the consumate professional so that it became almost impossible for the hero to understand what he had done when things started going wrong.


The clinic room was sterile in every sense of the word. While there was no chance of any bacteria having survived on the sparkling white tiles of the floor or the lustrous white laminate walls, there was also no chance of any human warmth surviving there either. It had no personality. No colour – literally. Nothing of any real interest. Even the air stank of antiseptic without the benefit of the usual fake floral bouquets found in hospitals.

But that was as it was meant to be Will supposed. And at least the chair was comfortable. A nice leather recliner that would have been more than welcome in his tawdry student flat. Except for the colour of course. It too was sterile white.

The only things that really stood out against the tyranny of white were the ring of machines surrounding him which had patches of colour here and there, the faces of Doctor Millen and his assistants, and the little flashes of colour on the various monitors as they displayed his vitals. It might have helped if the medical staff weren't all wearing white full length lab coats done up tight. But they were probably worn for reasons of sterility as well. Either that or to blend in with the walls.

But why the need for so much white? That was the thing he didn't understand. It was over the top and then some. Sure, it was a clinic and medical settings seemed to go for the white look.  But it wasn’t as if it was a surgery. He wasn't about to be cut open. It was a simple injection. It could be done in a field with a plastic needle and an iodine swab.

Still, when there was ten thousand dollars riding on the procedure he guessed he could live with a little white. 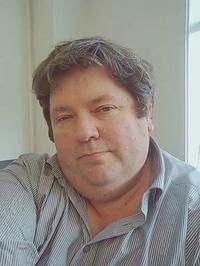