Excerpt from Of Dreams and Shadow by Deborah McKnight 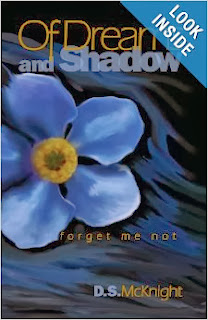 We live. We die. Is there anything more? Jenna Barton is about to find out. After moving to the coastal North Carolina town of Parson's Cove, Jenna has unwittingly stepped into the middle of a mystery involving a missing child. Unfortunately, the predator is still on the loose and Jenna has become his new obsession. With a little luck and a bit of paranormal help, Jenna might survive.

Of Dreams and Shadow: Forget Me Not opens with a scene where Sarah, a four year old girl is taken by a specter.  The only witness is Chase, her five year old neighbor — and no one believes his story.  Twelve years pass and Silas (the specter) has awakened and chosen his newest victim.

This is one of my favorite scenes.  I have a lot of compassion for Sarah.  She lost so much.  I imagined how it might feel to die and not “move on.”  I think Sarah would have watched as her parents suffered and would have longed to have made contact. But knowing Silas, she would have been afraid of the consequences.   She might have felt abandoned as her parents separated and moved from the only home she had known.  Through all the changes, Chase had been constant.  He had stayed.  She watched as he grew up and she fell in love with the young man he had become.

In this scene, Sarah finally feels as though it is safe to have a one-time visit with Chase.  She enters his room as he sleeps — wanting nothing more than a few stolen moments.  He awakens and a conversation ensues.  (This passage picks up midway through the conversation.)


“Things changed.” Sarah turned away from the window and
moved back to the bed. “Jenna came and drew Silas’ attention...”
She cocked her head to the side, “and yours.”
Feeling oddly uncomfortable, Chase briefly looked away before
replying. “I guess she did.”
“Not unlike you, Silas has become quite taken with Jenna. In
fact, it is his attraction to her that has made him vulnerable.”
“And you decided to take advantage of the situation.”
Sarah lifted her hand and slowly moved it to Chase’s. She
traced her finger over the back of his hand, a sad smile touching
her lips. “The sense of touch—you take it for granted while I can
only wish.”
Chase didn’t say anything. He didn’t know what to say.
She dropped her hand. “One does not live with Silas, and I use
that term loosely, and not learn to take advantage of opportunities
when they present themselves.”
“So what’s your plan?”
“My plan is to stop Silas.”
An impatient look crossed Chase’s face. “You know what I’m
asking.”
Sarah acted as though she had not heard him, instead she
repositioned herself on his bed. “You know that he is visiting her
dreams.”
“I thought as much.” Chase rubbed his eyes. “I just hoped I was
wrong.”
“We are going to use that to our advantage.”
“How?”
“Jenna told me about a journal. Did you read it?”
Chase shook his head. “Yeah, I did.”
She leaned forward, her eyes watchful. “What exactly did it say
about the necklace?”
“Something like, the necklace was to Silas what uncut hair was
to Samson.”
Sarah smiled. “Just as I thought.”
“We’ve got to get the necklace from him, right?”
“Oh, we’ve got to do more than get the necklace from him.
We’ve got to destroy it.” Sarah pointed her finger at Chase. “Or
rather, you’ve got to destroy it.”
“Me?” Chase leaned forward. “I don’t know anything about
getting rid of some piece of hocus pocus jewelry.”
“You’ve got a sledge hammer, don’t you?”
“Uh, yeah,” Chase looked confused.
Sarah smiled. “I bet a couple good swings and our problem
should be smashed.”
“Really?” Chase looked relieved. “I thought it would be a lot harder than that.”
“Oh, I’m sure it will be…”
“But you just said—”
“I said destroying it wouldn’t be so hard. But getting the
necklace isn’t going to be easy. It’s not like its going to be there
waiting for you to pick it up. Silas is very protective of his treasure.
Don’t underestimate him or his connection to Jenna.”
“What connection? The one where he enters her dreams and
scares the hell out of her?”
Sarah glared. “The one where he enters her dreams and seduces
her – because that is what he is doing.” She paused, allowing her
comment to sink in before continuing. “You don’t know him. You
haven’t seen him – not as he was before.”
“What do you mean?”
“Silas is beautiful and dangerous, all the more dangerous
because he is beautiful.”
Chase chuckled. “Men typically don’t describe themselves as
beautiful.”
“I wouldn’t call a tiger good looking. It is beautiful – dangerous
but beautiful and Silas is just like a tiger. He sets his sights on his
prey then hunts and kills it.”
“Then why go to the trouble of seducing her if he just wants to
kill her?” Chase asked.
“This has gone beyond his normal hunt,” Sarah explained. “He
wants her to choose to stay with him.”
“Like that would happen.”
Sarah’s eyes narrowed. “You may be surprised.” Standing up,
she continued, “I’ve been gone too long. I must go. This visit stays
between the two of us. No telling Jenna about Silas visiting her
dreams.”
A muscle in Chase’s jaw twitched. “She has a right to
know.”
“You’re absolutely right. Tell her. Maybe she’ll move. But
Silas will still be here and then what? I can’t keep watch over him
forever.” Sarah’s appearance altered and she was once again the
image of her four year old self. “I am tired, Chase – tired of living
a partial life, tired of being tied to a past that is long gone and a
future that will never be.”
“Sarah?” Concern laced Chase’s voice.
“Good night, Chase.” Her voice faded away as did her image
until nothing was left but a tiny spot of light that flickered and
then disappeared.