Excerpt from Something Wicked by Renee Harrell 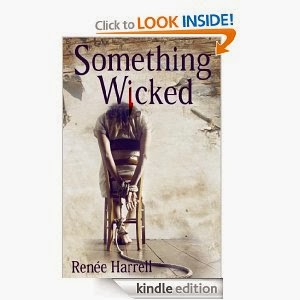 Something Wicked
by Renee Harrell

Reeling from a nasty break-up, Ann Lippens isn’t ready for a new relationship, even with someone as attractive as Cody Rhodes. When she rejects Cody's advances, the musician turns his attention to Ann's best friend, Kim.

Kim couldn't be happier. Cody is charming and mysterious, talented and sexy as hell. Who wouldn’t want to be at his side?

Within days, Kim is changing her appearance and behavior to please her new boyfriend. Ann soon discovers that Cody is the near-twin of a dead rock star named Bobby Winters. Winters had a dark and troubled history until his fiery demise. Bobby's string of girlfriends all died early, suspicious deaths.

Discovering the secret timetable for Kim's murder, Ann realizes she's the only one who can stop it. But it's not Kim who Cody truly wants....

When my partner, Harrell, and I finished writing the first draft of our story, I felt something was missing. We’d written a novel with a high school-aged protagonist – Ann Lippens is our take on a less secure, more body-conscious, Nancy Drew – but the tale had taken an edgy turn. We needed an opening that offered a hint at the darkness to come.

A few days later, we’d plotted the story’s prologue. We know a lot of readers can’t stand prologues (or epilogues) and routinely skip over them. I certainly hope they read this one…

Far below them, the sea splashed against a row of jagged rocks. The ocean roared up at her.
"Isn't this beautiful?" he said.
The warmth of his breath tickled the tiny hairs on the back of her neck. She turned to see him smiling.
For the first time in days, he appeared relaxed and happy.
"Yes. Yes, so beautiful!” Here at the cliff's edge, with the blue sea beneath her, everything seemed fresher, brighter. Her spirits lifted.
He asked her a question, his words snatched away by the sound of the ocean.
"What?" she shouted.
Irritated, he started to speak before changing his mind. He swept his arm out, his hand extended.
She reached out to him. When she did, he gathered her in his embrace. Pressing a hand on the small of her back, he began to sway.
He wants to dance, she thought.
He'd danced with her before but only once, the night they'd met. Now, he moved smoothly along the cliff's dirt surface. She matched his steps, content to follow his expert guidance.
It was romantic in a weird kind of way. Not a typical date, not by a long shot. After all, how many girls could say they’d slow-danced on Kraken's Peak?
She would remember this afternoon for the rest of her life.
He murmured as they danced. She strained to make out his words. A moment later, she realized there weren’t any words to be heard.
He was humming.
She recognized the tune. She didn’t like the song – Not that I’m going to tell him – but it was his favorite. He'd played it for her, more than once.
With a flourish, he ended the dance. He bowed to her.
As he straightened, she hugged him tightly. "This is perfect," she said into his ear.
"No." He studied her, from her red hair to the green patchwork jumper that brushed lightly against her hips. “Not yet.”
He yanked the heart-shaped locket from her neck. Staggering as the chain ripped through her hair and over her head, she caught herself at the very edge of the cliff. Beneath her shoes, tiny stones spilled into the void, tumbling into space.
She tried to step forward. He put a hand out to stop her, scorn in his eyes.
"Bye," he mouthed, his open hand shoving against her chest.
Flailing her arms desperately, her feet slid on the loose soil. She tried to regain her balance, grasping blindly for anything to stop her descent.
Screaming, she dropped over the edge of the cliff.
He watched as she fell. Her cry was lost in the thunder of the waves as they smashed into the rocks below.
"Things weren't perfect." He wrapped the chain of the locket around his fist. "Things couldn't be perfect because you weren't perfect. You could never replace the woman I loved.
“I have to get her back.”

"Renée Harrell" is the semi-pseudonym of Renée and Harrell Turner, a wife-and-husband writing team. Although we primarily write YA fiction, we've dabbled in science fiction (Aly's Luck and After Things Went Bad), teleplays (Bill Shakespeare's Next Big Mistake) and humorous mystery (Frankenstein, P.I.).

Check out their website HERE and find their books on AMAZON.